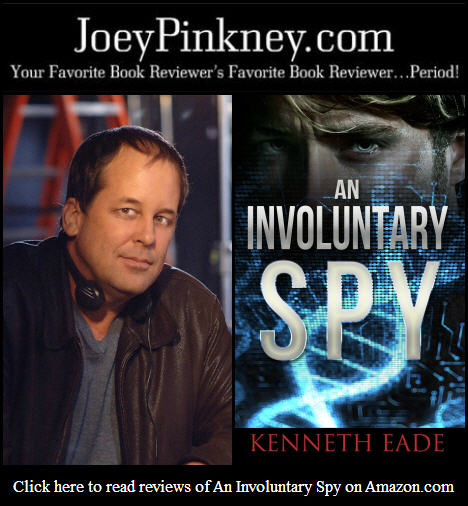 Kenneth Eade: While writing the best selling non-fiction book, “Bless the Bees”, I did a lot of research on the hidden dangers of genetically engineered foods. I was disgusted by the way the government agencies like the FDA and EPA were controlled by ex-executives from Monsanto and the fact that Genetically Modified Organism (GMO) foods undergo no safety testing by the government.

I thought to tell the story of how the big chemical companies quietly slipped GMOs onto our table. The best way I thought to do it was a human story about someone who was torn between their job and what was morally right.

JP: What sets “An Involuntary Spy: A GMO Thriller” apart from other books in the same genre?

It is also different from the genre because it is a believable story that could appear in the news headlines at any moment. And it educates the reader on the dangers of GMO foods at the same time as it entertains.

JP: As an author, what are the keys to your success that led to “An Involuntary Spy: A GMO Thriller” getting out to the public?

KE: Of course, the publishing industry is changing, and allowing authors like me to be published. “An Involuntary Spy” is out now on Kindle, and it will be in print within the next two weeks. The key to success of any book is to have a good cover and a compelling story. I think this has both.

JP: As an author, what is your writing process? How long did it take you to start and finish “An Involuntary Spy: A GMO Thriller”?

KE: I started writing “An Involuntary Spy” in September and finished in late November. I try to write every day. For inspiration, I would get away from the computer and get some fresh air. The scenes would naturally come to me and I would go back and write them down.

I had a basic outline of what was going to happen in the entire story, but not the details of the little story that would happen in each chapter. I move the reader back and forth between past and present to keep him or her hanging on suspenseful moments.

JP: What’s next for Kenneth Eade?

KE: I will keep writing fiction. This is the best genre for me. I already have in mind my next story – but it’s a surprise.

“I would be happy to autograph anyone’s “An Involuntary Spy” by Authorgraph. If you email me, I will send directions on how to send your paperback edition to me for an autograph. Hope everyone enjoys the book and learns something helpful as well.” ~ Kenneth G. Eade

3 thoughts on “5 Minutes, 5 Questions With… Kenneth G. Eade, author of An Involuntary Spy: A GMO Thriller”