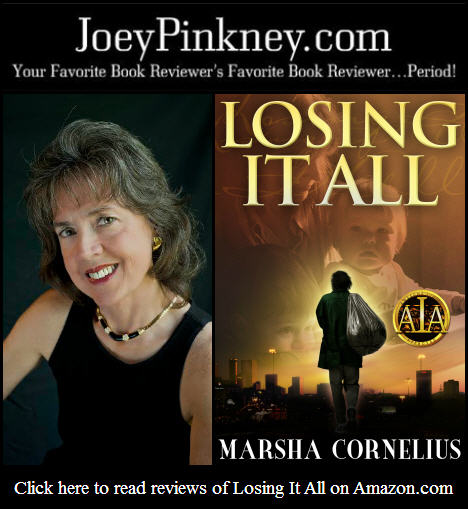 Frank Barnes is content living on the streets of Atlanta. A soup kitchen and a makeshift shanty sure beat his days as a POW in Vietnam. But Chloe Roberts can’t handle the eviction that sends her into the hell of homelessness. With no family or friends to turn to, Chloe and her children are sucked into the traumatic world of night shelters, and dangerous predators.

When they bump into each other at the soup kitchen, Frank offers Chloe a glimmer of hope that she can pull her life back together. She rekindles his lost sense of self-worth by taking his mind off his own problems. But they will not meet again until Frank is riding high as a working man, and Chloe has hit rock bottom.

By helping Chloe rebuild her broken life, Frank banishes the demons from his own past. Unfortunately, the past comes strolling back into their lives, threatening to destroy the happiness they have finally found.

Joey Pinkney: Where did you get the inspiration to write “Losing It All”?

Marsha Cornelius: When I moved out into the countryside, I came across an abandoned cinderblock house in the woods. The windows were all broken, and the house itself was half-hidden in brambles. But the roof didn’t leak, and the floors were sound.

I thought it was a shame that a house like that had been neglected. It just needed a little attention. And who might be willing to live in such a place? A homeless guy, who’s been sleeping in a park or under an overpass.

The idea snowballed from there.

JP: What sets “Losing It All” apart from other books in the same genre?

The problem is that “Losing It All” isn’t strictly a romance. It’s more along the lines of dramas like “The Glass Castle”, or “The Hunger Games”. People just trying to survive.

JP: As an author, what are the keys to your success that led to “Losing It All” getting out to the public?

MRC: When Amazon first started their Kindle Direct Select, I offered my first book, “H10N1”, free. I gave away thousands of books, and climbed way up the Amazon ladder. Unfortunately Amazon changed, and it isn’t as easy as it was before.

Now I have three books out, and the word of mouth from my first book, along with its popularity, brings readers back to see what else I have written.

I also tweet a lot, make friends on Goodreads, and request book bloggers to review my books.

JP: As an author, what is your writing process? How long did it take you to start and finish “Losing It All”?

MRC: I have finally made myself outline a book before I start writing. With “H10N1”, I just started typing away, not knowing where I was really going, so I rewrote that bad boy many times.

And I take long walks everyday, where I think about a scene, or a conversation, and work it all out in my head. I carry a small notebook, and jot down points.

My neighbors have gotten used to seeing me gesture wildly as I argue with an antagonist. And they stop and wait patiently, as they would for a wayward cow, until I finish what I’m writing and move out of the middle of the road.

My first book took years to write, because I only wrote on weekends. Now that I write full time, I try to finish a book a year.

JP: What’s next for Marsha Cornelius?

MRC: I’m working on a story about a college coed, 50 years in the future.

I’ve done the post-apocalyptic thriller about a flu pandemic, speculative fiction about cryonics, and drama with the homeless. It’s time for a YA/NA story.

I figure I’ll try a little bit of everything. (Well, maybe not a western. There’s too much dust, and spitting, in those.)

“Thanks for allowing me to spend some time with your readers, Joey.” ~ Marsha Conrnelius

One thought on “5 Minutes, 5 Questions With… Marsha Cornelius, author of Losing It All”