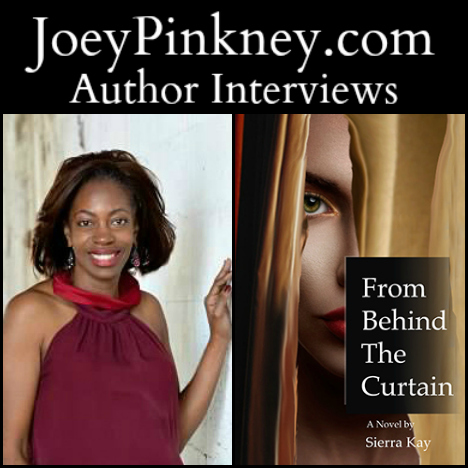 Sierra Kay: It actually started with a conversation with some friends. We were going to write a play. I’ve never written a play before, but I did write a novel. So I wrote two first chapters. Each one with the same characters, but taking the book in a different direction. It was supposed to be the basis for the play, but the novel kept writing itself.

JP: What sets “From Behind The Curtain” apart from other books in the same genre?

SK: My main character, Dee, deals with a lot. Even at the end, her whole life doesn’t get resolved and packaged in a bow.

In “From Behind The Curtain”, Dee deals with her mother fighting cancer, her deadbeat dad, bullying at school, running her household (such as it was), being approached by men old enough to know better, the first stirrings of love/lust, etc. And we didn’t even get to the Pastor’s death yet. This girl has a lot on her plate, but she’s very pragmatic about it. Tired, but pragmatic.

That’s life. Sometimes, life doesn’t give you the opportunity to resolve every issues in an allotted time frame. Plus, life has a lot of gray area. There are areas that require interpretation. Is good always good or bad always bad?

The real part that sets my book apart from others in my genre is the ending. It’s good. And that’s the part…I can’t talk about.

JP: As an author, what are the keys to your success that led to “From Behind The Curtain” getting out to the public?

SK: I’m an avid reader. Since I was young and used to hide romance novels between my mattresses, I always loved to read. It wasn’t just romance novels. I’ve read classics as well.

I love “From Behind The Curtain” as a reader and as an author. I’m confident that others will as well. It’s that belief in my book that keeps pushing me to get my book out there and encourage people to read it.

JP: As an author, what is your writing process? How long did it take you to start and finish “From Behind The Curtain”?

SK: “From Behind The Curtain” didn’t take as long as my first novel. I finished it probably in about four months, writing primarily on weekends. The ideas flowed for this book.

Now some say if the ideas flowed, why did it take so long? That’s just me. It could be that I type to slowly. I wrote half of it. Let it sit. Then, I figured out whodunit.

That’s right. When I started writing the book, I had no idea how it was going to end. Once I figured that out, I had to go back to the beginning to make sure that the ending made sense.

JP: What’s next for Sierra Kay?

SK: Brain: “We must prepare for tomorrow night.” Pinky: “Why? What are we going to do tomorrow night? Brain: “The same thing we do every night, Pinky – try to take over the world!”

Sorry, I digressed to Pinky and the Brain. I’m writing my next book. It’s kind of daunting because the main character is a man. Since I’m a female, I’m a bit hesitant. However, I’m getting it together.

“There are a ton of books on the market. Most of them you read, get to the end, nod your head and go to the next book on your list. There are few that will have you going back through the book to try to figure out what you missed. “From Behind The Curtain”” is that book.” ~ Sierra Kay

2 thoughts on “5 Minutes, 5 Questions With… Sierra Kay, author of From Behind The Curtain”