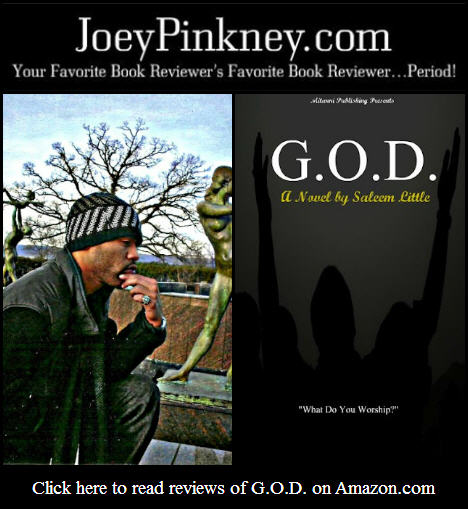 “G.O.D.” by Saleem Little stretched the boundaries of Urban Fiction. Through the microcosm of inner-city New York, Little shined the spotlight on the ulterior motives of the “War on Drugs”.

Wally is the child of a mother who is strung out from freebasing crack cocaine, and his disdain for her state of deadness is only matched by the state of squalor in which they live.

Dumare is the youngest son of a devout Five Percenter. As he learns profound life lessons from his father, Dumare is also consumed by the street life.

The only thing peaceful about Serenity’s life is her name. Her mother has H.I.V. and no remorse for making 11-year-old Serenity sell her body to feed her mother’s crack habit.

Roscoe is a boy was simply slipped through the cracks of society early in life. His mother blames him for killing his little brother in a fire that burned down their apartment building.

Hamid and Luqman are two, poor Afghani boys who chanced upon meeting a powerful drug lord in 1975. By 1986, they were assimilated into American society in Brooklyn, NY.

In “G.O.D.,” the stands for Gold, Oil and Drugs. The seemingly dystopian society that Saleem Little relays through this book is not a fantasy. It is the harsh reality of the Crack Epidemic that continues to shatter so many lives almost 30 years later in present-day America. “G.O.D.” gives an up-close view of the effects of the desolation that urban blight has on different groups of people from different walks of life. Instead of blaming poverty on the people trapped within the confines of their neighborhoodS, “G.O.D.” shares the horrors of the inner-city, its faces and its motives.

“G.O.D.” specifically focus on the year of 1986 because of the Reagan era’s “Just Say No” campaigns, which the book suggests were a cute façade to the tsunamis of destruction brought by the CIA and the CIA-backed armies in South America. Through the CIA, the American government used a Californian drug ring to systematically cripple Americans in ghettos nationwide. Whereas the US military and politicians hugely profited from cocaine under the guise of funding rebel armies in Central America to overthrow rogue governments, the Mujahedin brought in profits from heroin under the guise of shutting down opium drug lords and driving out the Soviet army. Back on American soil, America turned a blind eye on her own children.

“G.O.D.” lays out how the global greed and the shady economic practices of the rich and powerful affect the impoverished. In the book, Hamid and Luqman try to balance the tables by getting American educations. Their goal is to help their people and their motherland by waging a war of wits. Brute force is traded for intelligence. Rage is traded for strategy. Drugs in the inner city are traded for money which is used to fund their objectives.

Saleem Little wrote “G.O.D.” in a way that was both informative and entertaining. He distilled vast amounts of information and global history into easy-to-understand paragraphs that articulated his points. In doing so, he pu the actions of his characters in proper contexts. He writes “Intellectual Urban Fiction” that has its base in the inner-city and its connections to global phenomena. Little illustrated the butterfly effects of billionaires controlling the puppet strings of governments that turn a blind eye to a profitable inter-continental drug trade. Communities sprinkled across the globe are targeted by both law enforcement agencies and criminal activities. The billionaires profit while the disadvantaged are negatively affected in numerous ways by a “war on drugs.”

This paradigm was the backdrop to the pulse of this story. It is an inner-city war of revenge raged on the streets of Buffalo, NY. Rosco, in his perpetual string of bad luck and poor decisions, tries to regain mismanaged drug money by robbing an unsuspecting rich man coming out of a bodega. This botched robbery sets in motion a chain of events that tests loyalty, extinguishes lives and keeps the pages dripping with high-end drama.

Rosco’s blunder causes the death of Serenity, puts Dumare in a coma and turns the city of Buffalo upside down. A small, but interconnected, group of Afghans and African-Americans find themselves locked in a battle neither side can escape. Family bonds are tarnished, public safety is destroyed and urban warfare tears apart everyone in their paths.

Saleem Little uses historical facts, drug culture, urban blight and passionate storytelling to craft a tale that gives the reader more than a series of blind conspiracy theories. Instead, Little hits the readers from different angles. From a wide-angle lens, he develops a picture of an international dilemma. Then he zooms into two areas: a region of war-torn Afghanistan and a neighborhood in upstate New York. He zooms in even further to look at individual lives and how they were affected by the international dilemma.

Although the ending of “G.O.D.” is tragic, there are many lessons that Saleem Little pulls into clear view. Little walks a thin line between fact and fiction with “G.O.D.” This novel was a well-constructed look at the ways drugs, greed, politics and religion can possibly come together to profit a few at the expense of many.