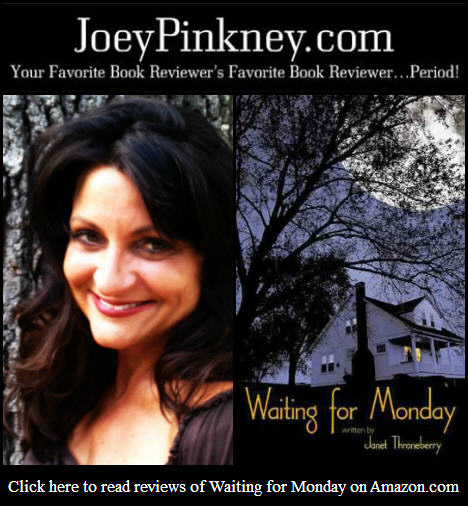 “Waiting for Monday” by Janet Throneberry was a wonderful coming-of-age-story set in the mid-South.

At its core, “Waiting for Monday” was about the life of Monday Dawn Holder. Monday was abhorred by her mother, resented by her father, disgusting to her sister, tolerated by her paternal grandparents and loved by her maternal grandparents – especially the grandmother. She faced a series of challenges and tragedies that would make the average reader count their blessings as the novel progressed. This story will tug at your heartstrings and leave you emotionally spent by its conclusion.

As her parents struggled to live the American dream of big houses in cute residential areas complete with big cars, Monday was trying to make sense of a world that seemed to hurl tragedy at her every chance it got. Her story unfolded in ways that will leave you emotionally charged chapter after chapter.

“Waiting for Monday” was initially set near Memphis, Tennessee, in the fictitious Eden County. Janet Throneberry skillfully depicted the dichotomy that is present between living in the big city of Memphis and living the small town of Jacy City in Eden county. The author showed the culture clash that happens as families moved from Memphis to Jacy City and vice versa. In the midst of this shuffle, Monday’s nuclear family did its best to keep up with the Joneses.

Monday was virtually unwanted by her family. Her mother, Sadie, verbally abused her in the name of motherhood. Her dad, Ron, physically abused her in the name of discipline. Her sister, Gloria, abused Monday by allowing her friends to sexually abuse Monday in the name of peer pressure. The only thing that kept Monday’s mother from giving her grandmother, Clara, full custody of Monday was Sadie’s stubborn pride. Sadie hated more the obvious connection between Monday and Clara than she hated Monday’s existence.

For Monday, her grandmother was a beacon of hope throughout the novel. Clara was clairvoyant and could sense what was going on in the lives of her granddaughter and daughter through intuition and dreams. Clara’s psychic abilities skipped a generation and blessed Monday with powers that took her decades to understand and to grow into. It is that supernatural bond that helped Monday stay connected with her grandmother through her worst, most depressing experiences – including rapes, abuse and loneliness.

“Waiting for Monday” showed what lies beyond the facades of a squeaky-clean house, a hard-working dad and a Southern Debutante daughter. The Holders struggle to maintain the image of the picture-perfect family. Monday is often blamed when her family’s imperfections bubble to the surface for public consumption. Ron worked hard, but his love for his family was overshadowed by his insecurities. Sadie could have been a loving mother, but her guilt caused her to drive others away. Gloria was beautiful, but her narcissistic ways caused her to manipulate situations in hideous ways.

With “Waiting for Monday”, Janet Throneberry has a very emotional story to tell. The things that Monday Dawn Holder experienced made for an absolutely chilling read. Throneberry has a style of storytelling that at times is verbose. This became a double-edged sword for this novel. There were times where the author strung together the perfect combination of metaphors and adjectives to paint a picture so crisp that she put you smack dab in the middle of what was going on.

However, there were many times that Throneberry’s wordiness got in the way of letting the story flow. Sometimes, Throneberry’s word choice was simply inaccurate, where the wrong word was used in place of the intended term. In those cases, the meanings of those sentences was changed to the point where they did not make sense in the context of the story. This made for an uneasy reading experience.

The first quarter of “Waiting for Monday” was nonessential, which quickly whirls you past a myriad of miscellaneous characters. None of them had any true relevance after their introduction. I’m assuming that Janet Throneberry wanted to set the tone for the novel and illustrate the point that below the surface, everything was not what it seemed in Eden County and the surrounding areas of middle class America. However, the various anecdotes could have been better utilized by Throneberry as separate pieces of flash fiction using Eden County and Memphis as their base.

To that effect, “Waiting for Monday” could have begun when Sadie pulled up in her car to Clara’s house to announce her pregnancy with Monday. Readers would have been quickly pulled right into Monday’s world without a motley crew of interesting yet extraneous and irrelevant characters. Once you read how Monday was born and subsequently got her name, you can not help but to fall in love with this story. From her birth to the end of the novel, “Waiting for Monday” gave a powerful reading adventure.

This novel also needed a proficient editing job to polish and refine the story to fully reflect the powerful saga of Monday Dawn Holder. As mentioned earlier, the wrong word here and there made reading this story confusing. Using the word “bawdy” in place of “beady” totally changed the context of the sentence. Using “passed” in place of “past” caused me to scratch my head instead of continuing to read. “Sighting” and “siting” make for different sentences when interchanged.

Janet Throneberry also wrote “Waiting for Monday” in her unique Southern vernacular. That was another double-edged sword for the novel. It added flavor in some places, but it took away from the flow in others. Many times prepositions were left out of sentences, which caused the sentences not to make sense because the direction of the action had to be figured out. Throneberry’s style of putting sentences together, along with her thick metaphors, was hit and miss. I was on the fence on this aspect of the story. On one hand, I understood the desire to have a unique voice as an author as attested to by Throneberry’s peppered moments of pure literary genius. On the other hand, I felt like there were too many places in the novel that needed to be tightened up to make it easier to read. That boiled down to standard spelling, grammar and punctuation.

Monday Dawn Holder’s character in “Waiting for Monday” by Janet Throneberry was nothing short of remarkable. She made you root against Monday’s antagonistic family while falling deeper in love with the bond that can grow between a grandparent and a grandchild. Throneberry’s depiction of the world in which Monday lived was detailed and easy to relate to. The novel would benefit from a thorough editing, and an exclusion of everything before Monday’s birth, so that the execution of the story matched its level of intensity.