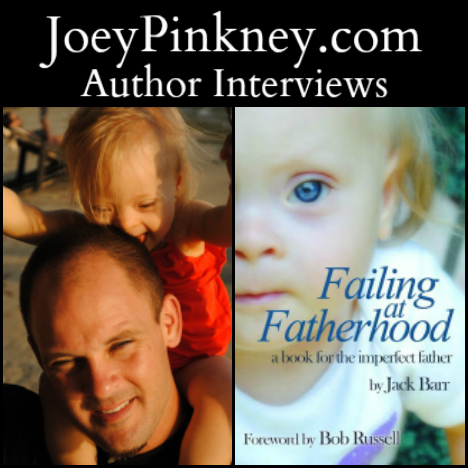 Starting with an article on CNN and now the author of his first book, Failing at Fatherhood, Jack Barr shares his deeply personal story as a new parent who has recently learned of his daughter’s inborn chromosomal deficiency.

His daughter, Marley, and her diagnosis of Down syndrome consequentially spiraled his life down into an overwhelming state of depression, fear and anxiety, that only forced him to search for answers through the multifaceted events throughout the timeline of his life. Barr’s service as a missionary with his wife in Thailand set up the story of failure and redemption as his apparent faith compeled him to resolve his past, reflect on the present, and passionately hope for the future.

Joey Pinkney: Where did you get the inspiration to write “Failing at Fatherhood”?

Jack Barr: My daughter and her birth inspired me to write Failing at Fatherhood. Before she was born, I had a distorted view of people with special needs. Instead of being a proud father, I was an emotionally absent father for my daughter her first year of life.

JP: What sets “Failing at Fatherhood” apart from other books in the same genre?

JB: Honesty sets my story apart from the others – brutal honesty. I am open about my fears, failures, faith, and past. Here is a quote from Dr. Woodrow Kroll about the book:

“Raw. Emotional. Honest. That’s Jack Barr, wearing his emotions on his sleeve, in his book Failing at Fatherhood.”

JP: As an author, what are the keys to your success that led to “Failing at Fatherhood” getting out to the public?

JB: My book journey started with CNN. After the popularity of the article, I realized that my story needed to be shared with other parents. The key for me is word-of-mouth. I want people to think of Failing at Fatherhood when a family member, friend, or an coworker is struggling with a birth of a new child. Numerous families helped me, and I want to offer the same insight to other parents.

JP: As an author, what is your writing process? How long did it take you to start and finish “Failing at Fatherhood”?

JB: It took me two years. From the moment the publishers contacted me to the release was two years. Writing Failing at Fatherhood was the easy part for me because it was my story. The difficult part has been editing and promoting the book.

JP: What’s next for Jack Barr?

JB: First being a dad. That is my main focus right now. We also plan to continue teaching in Thailand for the foreseeable future. Marley will be starting school in the next year, and we are excited about that opportunity. Finally, I am pursuing more writing projects, event speaking, and promoting If They Had A Voice.