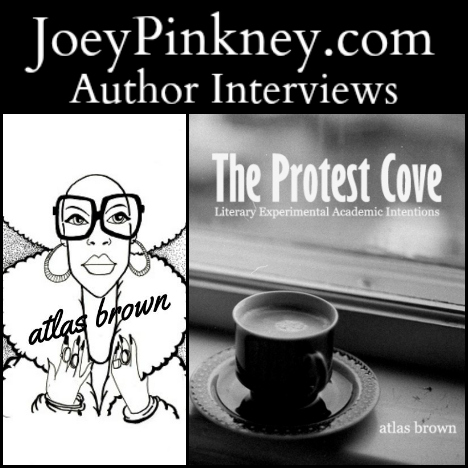 atlas brown’s latest gift to the public is a treat for all that have endured the halls of academia as writers. Who says that one has to be politically correct to be a good writer? Why not expose your muse? This is one of the many reasons the writer chose to compile a collection of short-stories from her academic experiences.

As an experimental fiction writer, atlas brown makes it known throughout the work (though she fought tooth and nail to be true to her voice) that she was writing to her own beat and drum. There are six stories that will have readers wanting more of the writer’s work. A few of the featured works include: The Sandwich, Jazz Walking, and R.O.S.E.

The author proclaims that her writing is solely based off of what she believes is truth in the form of fiction.

Joey Pinkney: Where did you get the inspiration to write “The Protest Cove | Literary Experimental Academic Intentions”?

atlas brown: My inspiration for “The Protest Cove” came from writing experimental fiction while in undergrad and accepting that this is the genre that my work fits best in within the world of creative writing.

JP: What sets “The Protest Cove” apart from other books in the same genre?

ab: I don’t compare my work to other authors. I think that we all have our own flavor. My flavor is to the point and simple. I choose to be different with regard to how the written word lives on the page.

JP: As an author, what are the keys to your success that led to “The Protest Cove” getting out to the public?

ab: Using social media has been a blessing in disguise for my work since I live outside of the United States. Being that I’m stationed in Paris, France — I get a chance to have a broad fan base with the help of social media and having a website.

Additionally, my publicist is the best, and she lives in the United States and makes sure that my work is always being rotated in some fashion.

JP: As an author, what is your writing process? How long did it take you to start and finish “The Protest Cove”?

ab: My writing process is really off the radar. I just write and then write some more. I don’t have a time that I can give anyone. However, I do prefer writing during the wee hours of the morning. I love writing in the rain it’s so sensual.

It took me a long time to have the courage to release “The Protest Cove”, because I wanted to make sure that the timing was right within my soul. I’m glad that I was able to let the work go to proceed in my literary journey.

JP: What’s next for atlas brown?

ab: My first novella will be debuted in a trilogy series. I’ve already released the excerpt to “Charlie.Browne.2.Butahflies.&.Painky.Lillies”. The short story will be available in print and as an e-book in September of 2013. The full-length novella will debut in 2014.

“Thank you for this awesome interview! I appreciate your support.” ~ atlas brown