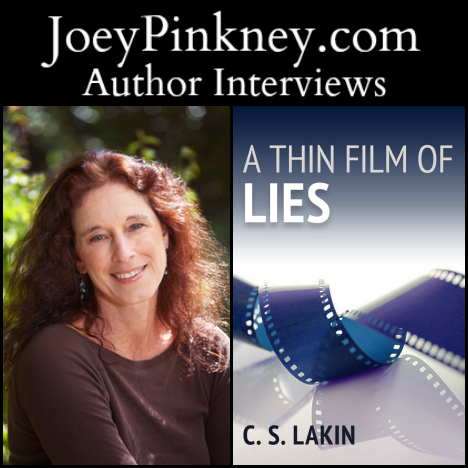 C. S. Lakin: “A Thin Film of Lies” was inspired by personal experience. I had gotten a job in LA at a desperate time in my life, when I had a young child and needed the money. I only worked at this place about a week when I was wrongly accused and fired. It upset me greatly, and I thought about people going postal, pushed to the edge of their sanity, so thought of writing a novel based on this.

I first wrote “A Thin Film of Lies” for the general market and after years of being unable to sell it, rewrote it for the Christian market, featuring a female homicide detective who is a believer.

JP: What sets “A Thin Film of Lies” apart from other books in the same genre?

CSL: My books are all edgy and intense. I believe in portraying real characters with real problems that are not easily solved. I wanted to do a crime thriller that showed a cop led by faith by trapped by the system, yet who saw God able to work through the boundaries.

“A Thin Film of Lies” is not a typical Christian novel but is very faith-based, and I hope nonbelievers will find it realistic and inspiring.

JP: As an author, what are the keys to your success that led to “A Thin Film of Lies” getting out to the public?

JP: As an author, what is your writing process? How long did it take you to start and finish “A Thin Film of Lies”?

CSL: It depends on my time. Right now I work full-time, but I’m writing a novel in the evenings. By pushing, it will take me three months to write a novel from start to finish.

Most of the novels I’ve written I’ve done so writing all day every day. Since I need to work full-time right now, it’s more of a challenge.

CSL: I’m finishing up a historical romance, which I plan to release next month. I have more books in that series. Eventually, I’d like to write more books to follow up “A Thin Film of Lies”, with Fran Anders, detective, as the key character. I am finishing up book seven in my fantasy series with AMG right now as well.

One thought on “5 Minutes, 5 Questions With… C. S. Lakin, author of A Thin Film of Lies”