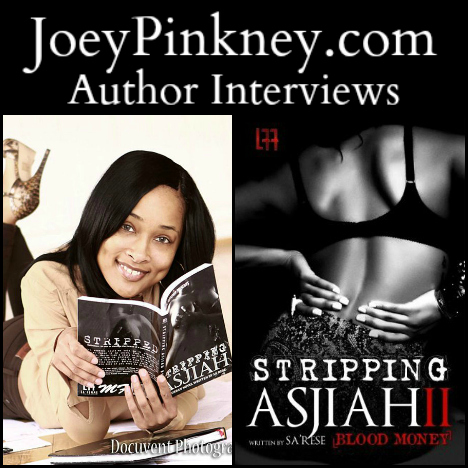 In “Blood Money”, Asjiah comes into her own while trying to survive without her brother while still confronting demons of her past. “Blood Money” continues to touch on sensitive issues in the world like abortion, miscarriages, and the death of our youth. (Asjiah is pronounced Asia)

Joey Pinkney: Where did you get the inspiration to write “Stripping Asjiah II: Blood Money”?

Sa’Rese: I actually didn’t need much inspiration to write “Stripping Asjiah II”. I knew there was going to be a sequel given the way I ended part I.

I wanted to sit back and make sure that’s what the readers wanted. After the response I got, I knew I had to write a sequel.

JP: What sets “Stripping Asjiah II: Blood Money” apart from other books in the same genre?

S: I didn’t write the other books that are in the same genre. It may sound a little cocky, but I believe that’s what sets “Stripping Asjiah II” apart.

My imagination is a bit weird, so I’d like to think that me thinking outside of the box is what sets me apart.

JP: As an author, what are the keys to your success that led to “Stripping Asjiah II: Blood Money” getting out to the public?

S: The readers. I wouldn’t have been able to do it if it weren’t for my readers. Word of mouth is a very powerful thing. Thank you, guys, for all your support. It also helps to have a publishing house behind you.

JP: As an author, what is your writing process? How long did it take you to start and finish “Stripping Asjiah II: Blood Money”?

S: I wrote a good 80% of “Stripping Asjiah II” in a month. After I got that far, I stopped because it seemed “too much like write” and everything was flowing too easily. I knew that I had to go over it with a fine-toothed comb because sequels can make or break you.

After it was all said and done, I finished in three months. In reference to my writing process, I don’t really have one. I just write what’s in my head and try to make sense of it later.

JP: What’s next for Sa’Rese?

S: Well, “The Color of Money” is set to be released on Halloween of this year. It’s actually the back story of one of the characters in the Stripping Asjiah series. The fans seemed to like him as a character, so I wanted to go back and let them see what made him the way that he is.

“Larceny”, which has nothing to do with the series, is set to be released in November. It’s a psychological thriller. I know its a big risk to stray away from what your readers know you for and what they are accustomed to, but I don’t want to ever box myself in. “Larceny” will show my range and hopefully pick up some more readers along the way.

I’m also in the process of building my own interactive website. I have my hands full to say the least, but I’m very excited.

“For those in the Atlanta area, I will be at the UBAWA Book Fair in Atlanta Ga on September 28th.” ~ Sa’Rese