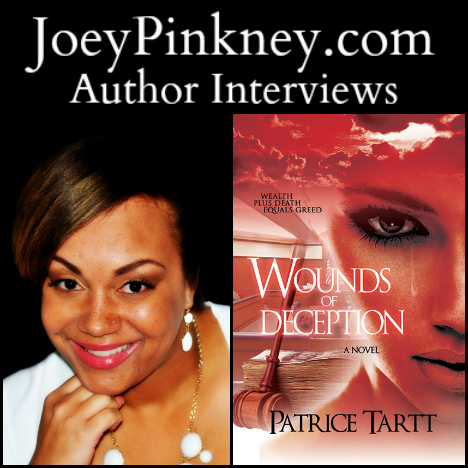 Patrice Tartt: I was inspired to write “Wounds of Deception” when I lost my father in 2011 to amyloidosis, a rare disease. My debut novel covers many topics that are considered taboo surrounding the illness and/or death of a loved one.

JP: What sets Wounds of Deception apart from other books in the same genre?

PT: Simply put, “Wounds of Deception” breaks the silence on these seldom talked about issues. I cover everything in this fiction novel from unexpected illness to giving extra thought in who you should and should not trust to be Power of Attorney should anything happen.

JP: As an author, what are the keys to your success that led to “Wounds of Deception” getting out to the public?

PT: Research, research and more research! You can never know enough about writing and publishing a book. The one thing that I have found is in this industry everyone is SO helpful! All you have to do is ask.

The beauty of it is that if the person in which you are asking a question doesn’t know, they know who to refer you to for the answer. Authors support authors, and it is truly a beautiful thing. There is no competition here, unlike many other industries.

JP: As an author, what is your writing process? How long did it take you to start and finish “Wounds of Deception”?

PT: My writing process was brainstorming the topics that I wanted to cover in the book. Then next thing is creating my characters, which is the fun part. Afterwards, I’m putting together an outline and then writing! It took me a little over a year and a half from start to finish.

JP: What’s next for Patrice Tartt?

PT: I want to continue my writing journey. This is my passion. I absolutely love it! I plan to start my second book after the new year, 2014.

http://patricetartt.com (currently under construction until August 14, 2013)

“Please spread the word about my debut novel Wounds of Deception. It is definitely going to have readers thinking about several serious topics surrounding illness, death and family.” ~ Patrice Tartt

7 thoughts on “5 Minutes, 5 Questions With… Patrice Tartt, author of Wounds of Deception”