JoeyPinkney.com Book Review
“Nights Over Egypt: An Eye of the Storm Short”
by Elissa Gabrielle
5 of 5 Stars 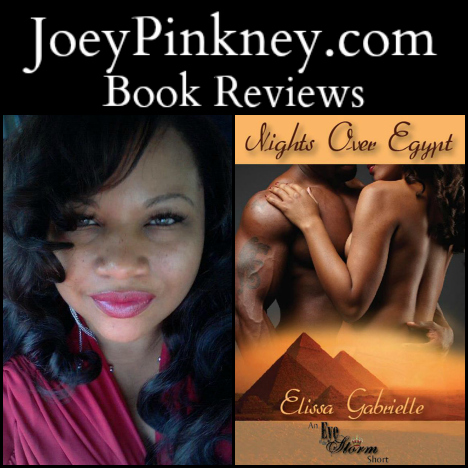 Elissa Gabrielle puts words in an order so skillfully that you can at times tell the very cadence of what’s being spoken by the characters in her stories. “Nights Over Egypt: An Eye of the Storm Short” is no exception. Nestled in a nook known as “Nights” in Newark, NJ, a pair of poets pour their passions. Intertwined by dueling desires, King and Egypt detail dirty thoughts through a poetic dialogue that defines divine attraction.

In “Nights Over Egypt”, veteran author/publisher Gabrielle builds a world around the gravity of a mutual desire that rests between two powerfully potent practitioners of verbal gymnastics. Visions are filtered through the minds, bodies and souls of two wordsmiths as they wage a peaceful war in the midst of unwitting watchers. Even when alone, each lover thinks of the other – smothered by thoughts of what could be, what should be and what will be.

There are three distinct places from which you experience this mixture of poetry, passion and perspective – Egypt’s mind, King’s mind and their performances under the bright lights of Nights. “King” is a name aptly appointed for a demigod draped in a crown of dreadlocks. He is the MC, the main event and the mocha man of Egypt’s moist desires. And if her body measurements are any indicator, Egypt is as fertile as the soil along the Nile and as versatile as the cotton which billows along its banks. Then there is the epicenter of it all: “Nights”.

When either King or Egypt is left alone with their own thoughts, Gabrielle still employs syncopated syllables to pepper the players’ inner-dialogue and intricate ideas. Insecurities are sewn into the fabrication of sequestered conversations depicting a mutual love that has yet to be consummated. Egypt wants to give him her rhythm. King seeks an abundant Earth onto which he tends to build his nation.

Inside of Nights, their verbal compositions are sharpened for competition. The spoken word venue doubles as the lair for Egypt and King’s veiled, lyrical love-letters. Like battle rappers, King and Egypt pull images and information from their immediate surroundings. Anything is fair game. Each chapter whips you  back and forth between the ponderings of Egypt and King. The tension is so thick, it makes you wonder, “If the verbal foreplay is this good, what will the sex be like? Because there will be some sex!”

If you like to be drawn into a story because of its word order, word choice, metaphors, subtleties, innuendos, wit, humor, love, lust, infatuation, etc., “Nights Over Egypt” is for you. Elissa Gabrielle squeezed a lot into this short story without leaving it overstuffed. You can feel the heat, smell the musk and might get tipsy by the end of this intoxicating narrative.

2 thoughts on “JoeyPinkney.com Book Review – Nights Over Egypt: An Eye of the Storm Short – Elissa Gabrielle”