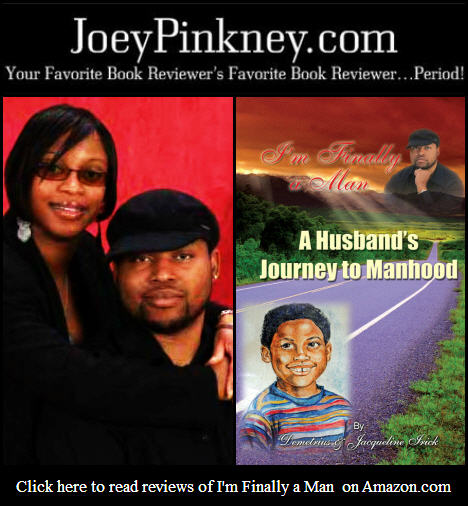 “I’m Finally a Man: a Husband’s Journey to Manhood” by Demetrius Irick is an autobiography of a man who made something of himself despite everything that was against him. Irick was a man who came from humble beginnings. Instead of becoming a product of his environment, he took it upon himself to change his landscape through his own story of tragedy and triumph.

Sitting in an empty room in a quiet house, Irick stared down the barrel of his father’s gun. He contemplated the ultimate decision. In the midst of that moment, he placed his fate squarely in the hands of God. From that experience, a path to fulfill God’s purpose for Irick’s life began. Far from being picture perfect, the story told by Irick and his wife was nothing short of inspiring.

“I’m Finally a Man” is more than an autobiography. Irick’s plan was to use his own life as a textbook of sorts for a future generation of parents who might not be able to see or understand the signs of what their children are going through or who may be influencing their children in a negative manner. He also showed women how to navigate living with a man who is a serious work-in-progress, so to speak.

Irick was a very inquisitive and intelligent boy growing up. Different situations that were seemingly typical to childhood held profound lessons for a mentally-developing Irick. He learned to sense and react to oncoming trouble to avoid its fall out. He learned to be careful of what he led other people to do.

Irick did what most young boys do in their initial attempts at manhood. He dated and attempted to bed as many young women as possible to gain status among his peers. What struck his as a reality, looking back on this situation as an adult, was that he had become what he didn’t like in his father – a womanizer.

Outside of his parents, Irick learned a great deal from his grandparents. Irick’s grandfather taught him the virtue of hard work and the necessity of leaving behind his loved ones in order to make a living for those same loved ones. His grandmother showed him the peculiarity of being totally dependent on another person for sustenance. On the flipside, she also taught him the value of love and affection towards children.

As a youth, the good boy turned into a bad young man. While still in high school, Orangeburg, SC, a.k.a. the “O.B.”, and the surrounding areas, became his stomping grounds. Peer pressure and notoriety led to Irick covering up his positive qualities with a sinister alter ego that relished fighting, drugs and roguish behavior. This downward spiral gained him a new set of “friends” and a new set of problems. His negative activities attracted negative energy and harmed his outlook on the future and also harmed the people who lie in the wake of his violence.

Moving forward in life, Irick faced a series of ups and downs – mostly downs. Trying to distance himself from the negativity of his neighborhood, he went into the military straight out of high school and then on to college. Out of place in these new settings, Irick quickly found himself back in the clutches of devilish behavior – not for survival but for familiarity. A conversation he had with his grandmother and her subsequent death was the beginnings of a turning point for Irick.

The saying “before things can get better, they usually get worse” directly applies to the events following his grandmother’s death. He begins the feel the weight of the world around him – the good, the bad and the ugly. The darkness of his past revealed demons, and those demons could be seen by Irick as physical manifestations as he went around his old neighborhood. Irick dealt with his mental illness and psychosis by himself and writes about it in vivid detail.

For a long period of time after his grandmother’s death, Irick floated around helplessly. Out of everybody that had access to him, only one friend spoke to him like his was a regular human being. To clear his mind, Irick was encouraged to visit a cousin out of town. After going there, he found himself in jail.

** While incarcerated, Irick became highly animalistic and full of rage because he felt he was locked up under false pretenses. It was there that he received an unintentional “shock therapy” from police officers who were charged with defending themselves from Irick’s unleashed aggressiveness. That shock treatment came in the form of being tasered on more than one occasion during some serious scuffles with the officers within the jail.

Coming out of jail, Irick’s mentality was re-aligned, and Irick lead a more positive life. He was even able to maintain a job. In time, he paid for his debt to society for the three assault charges he racked up during his incarceration. Afterwards, a new chapter unfolded after the courtship of a woman he fell in love with: marriage.

Not only did Irick give his accounts of the early, rocky years of his marriage. He invited his wife to include her perspectives in “I’m Finally a Man.” Jackie Irick’s insight was very telling of the normal stresses that come about as people try to bring their personal cultures together to create a familial culture. Jackie told of a life with a man as a husband who was still a boy in terms of financial and social maturity.

The frustrations of day-to-day living was a three-month separation. Jackie continued on with raising the children as best as she could and began to resent her husband Demetrius. He continued a life of unwise spending practices. That, among other things, caused the Iricks’ separation from each other. In the midst of all the madness was the effect of the separation on their daughters. It was the hardships endured by their children that cause them to give the continuation of their marriage a serious shot. Marriage didn’t magically get easier, but the Iricks stuck with it.

From that desire to truly pursue a marriage by making as many personal adjustments as possible for the betterment of the family as a whole, the Irick Family is an example of how God can turn around a seemingly hopeless situation. No longer defined by society by the felonies he gained under questionable circumstances, Demetrius Irick is now a beacon of light for his immediate family, his extended family, his community and the people he mentor. He is not perfect. Even within his imperfections, he shows what people from negative situations can do by keeping God intact and having a strong support system with them to patiently and sternly help them strengthen their weaknesses for the betterment of a multitude.

What is most refreshing about both Demetrius’ and Jackie’s offerings within “I’m Finally a Man” is the fact that they tell it exactly how they saw and felt it. There was no sugar coating nor disrespect. I appreciated this honesty because this book, just like “life”, doesn’t fit in a neat little box. There are jagged edges. Both Mr. and Mrs. Irick give you one to grow on. This book will be a great read for anyone who is dealing with a child or young adult going through the throes of immaturity, drug abuse, mental breakdowns and mental health issues.