JoeyPinkney.com Book Review
“The Women of Block 12”
by Linda Pischke
5 of 5 Stars 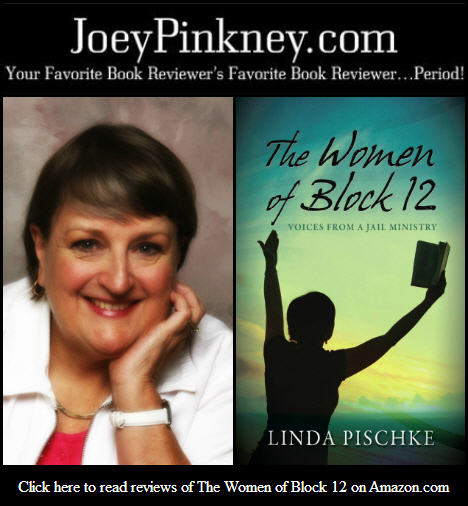 Prior to joining the prison ministry as a volunteer, Linda Pischke was like the average Christian. She was comfortable in knowing the virtue of being a Christian but did little to step outside of her comfort zone to actually reach out and touch those who needed ministering the most. When she joined the jail ministry, Pischke’s life changed in ways she never imagined.

Instead of going into Block 12 as a teacher, Pischke came out a student. She learned from the women whom she initially condemned. In a short amount of time she learned that the sum total of their being was much more than their debts to society and what caused those debts. She also learned that the Jesus that was near and dear to her heart was no different than the Jesus that kept these incarcerated women strong behind walls of concrete and metal.

First working with one Prison Chaplain, affectionately known by everyone as Poppa Joe, in the capacity of a newsletter editor, Pischke felt like she was in over her head. The success of the publication and the distance she was able to keep between her and the prisoners made her feel safe and productive. The second chaplain, Chaplain Mary, asked Pischke to help her with a journaling class, which meant leading the class and working up close and personal.

Slowly but surely, those two chaplains caused Linda Pischke to do what most do not take time to do as Christians: step out of their comfort zone and actually do God’s work face-to-face with people who need it the most. Instead of playing it safe, Pischke went deeper, and it paid off. She was just as changed as the women she interacted with. She learned that people are people, regardless of whether or not they were free or locked up.

The ever changing cast of women that were placed in Block 12 provided Pischke a glimpse into the true nature of women in prison: They are human. They came from every cross section of society possible. They have stories. They have family ties. They form bonds within their surroundings. But most of all, Block 12 shows the spiritual fortitude that exudes from the women as they navigate the high-stress, compact dwelling.

Pischke does a great job relaying her feelings and insights as she becomes aware of the humanity of the women who attend her Wednesday night ministry. She realizes not all of the women in the county jail are shadows in the dark. Every woman in that county jail was not simply a bad statistic or simply a product of their environment. The women of Block 12 who came to and went from the prison ministry had families, dreams and lives that stretched beyond the concrete walls.

In addition to volunteering as a facilitator for the Prison Ministry, Pischke worked diligently to compile her feelings and thoughts about the realizations she learned while becoming involved with an ever-changing group of women. Her blanket views of imprisoned lawbreakers began to shift. Pischke does not pardon them for their crimes nor justify what they broke the law for. She saw people instead of shadows. She saw that the only real difference between her and the women to whom she ministered was the prison. God is God. Sins are sins. Redemption is possible for everyone, regardless of their plight.

The second half of “The Women of Block 12” was comprised of letters given to Pichke telling the stories of the women in their own words. Some letters are informative. Some are adventurous. Others are downright ugly. They all had a common thread of reflection and passion. They gave names, faces and places to people who were reduced to a series of numbers or marginalized by the industrial prison complex.

When you read these stories, you will see the normal contributing factors to a life of crime: rape, incest, drug abuse, poverty, stealing, etc. What made “The Women of Block 12” absolutely powerful was that these stories were told by the women that lived and survived tough lives. The themes may have recurred, but each woman’s story was unique and interesting. The stories also showed the power of God in terms of redemption and triumph. Although these women may not achieve great heights to the point where their life stories are made into movies, their stories can provide women and men going through similar struggles an example of a way through the heartache and pain from people who have lived it and can tell the tale.

The beauty of the stories shared by the inmates was that they are authentic, naked and raw. Some of the things that were shared in terms of what lead them to being in Block 12 and beyond were so tragic they could not have been fabricated. These stories were not heroic nor commendable. There were broken homes, children lost in the foster care system, manipulative family members and going in and out of the prisons like they were department stores.

“The Women of Block 12” is also a tremendous resource for anyone interested in reaching out to inmates and making a spiritual difference. There are guides dealing with things like as making donations, becoming a pen pal, adopting an ex-offender for support, among other things. All-in-all, “The Women of Block 12” was an eye-opener. This book was not only a book about a woman who took the time to help other women in need. This book was also a voice for the voiceless and a potential help for those women who might be on the verge of giving up on God amidst it all.