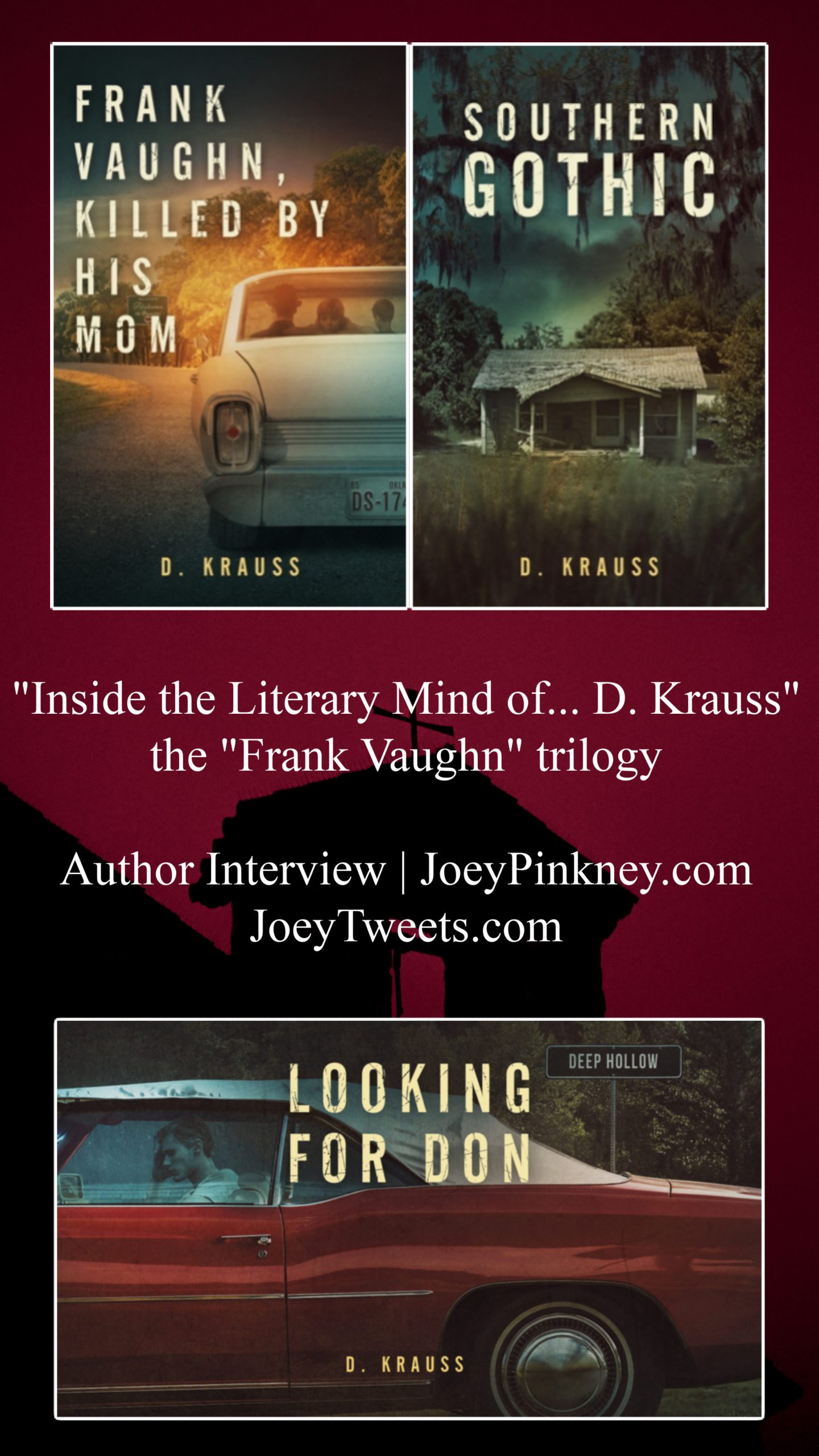 Joey Pinkney: The world in which Frank Vaughn dies by the hands of his mother is jagged and dangerous. What pieces of fantasy and reality did you pull from to give us the world explored in Frank Vaughn Killed by his Mom and its sequel Southern Gothic?

D. Krauss: From 1958 – 1968, America was kid Disneyland…the somewhat disturbing Pinocchio/Snow White/Snow Queen Disneyland, but you pays your money, you takes your chances. The freedom we had…marvelous. We hit the back door a little after sunrise and only crossed it again after the third shout of “Supper’s ready! Get your butt home!” Then right back out the door, if it was summer, or homework and then television until bedtime, if it wasn’t.

We walked to school from 1st grade on, rode our bikes up and down construction-site hills loaded with nails and broken concrete, jumped off walls with umbrellas as parachutes, ran through drainage ditches to reach local parks…all the stuff that gives parents heart attacks today. And yes, bad things happened: kids got run over, got burned up, drowned, but that was within the percentage of acceptable risk.

Did that mean our parents were neglectful, uncaring ogres in need of close government supervision? No. They were Depression Era kids who had fought WW2, and they had a “sink-or-swim” philosophy. Someone bullied you in school, then Daddy told you to punch ’em in the nose. You fell down and skinned a knee, then Mommy kissed the booboo and swatted you right back out the door. As a kid, you were expected to hold your own, be self-regulating, handle the world. It was Fantasyland. It was wonderful.

And then the real world showed up.

The Kennedy assassination, the Richard Speck murders, the Watts riots, and – closer to home – Frank’s murder and my family imploding. These happenings were hammer blows breaking the knees of my Ozzie and Harriet life. And I say that not as some kind of cynical sneer against the white bread world in which we lived, but in mourning. It was life the way it was supposed to be. And then it wasn’t. And I still mourn it.

Frank Vaughn… shows that world breaking. Southern Gothic shows the aftermath. Are the books true? Frank Vaughn pretty much is, although a lot of the events didn’t happen to the people depicted, or in the sequence presented, or to the characters involved. Southern Gothic is not true — it is “based on true events,” which, as many of you moviegoers know, means great liberties were taken. A lot of the characters in both aren’t real but patched together from bits and pieces of people who are. So why not write a straight-up memoir, then?

Because no one would believe it. 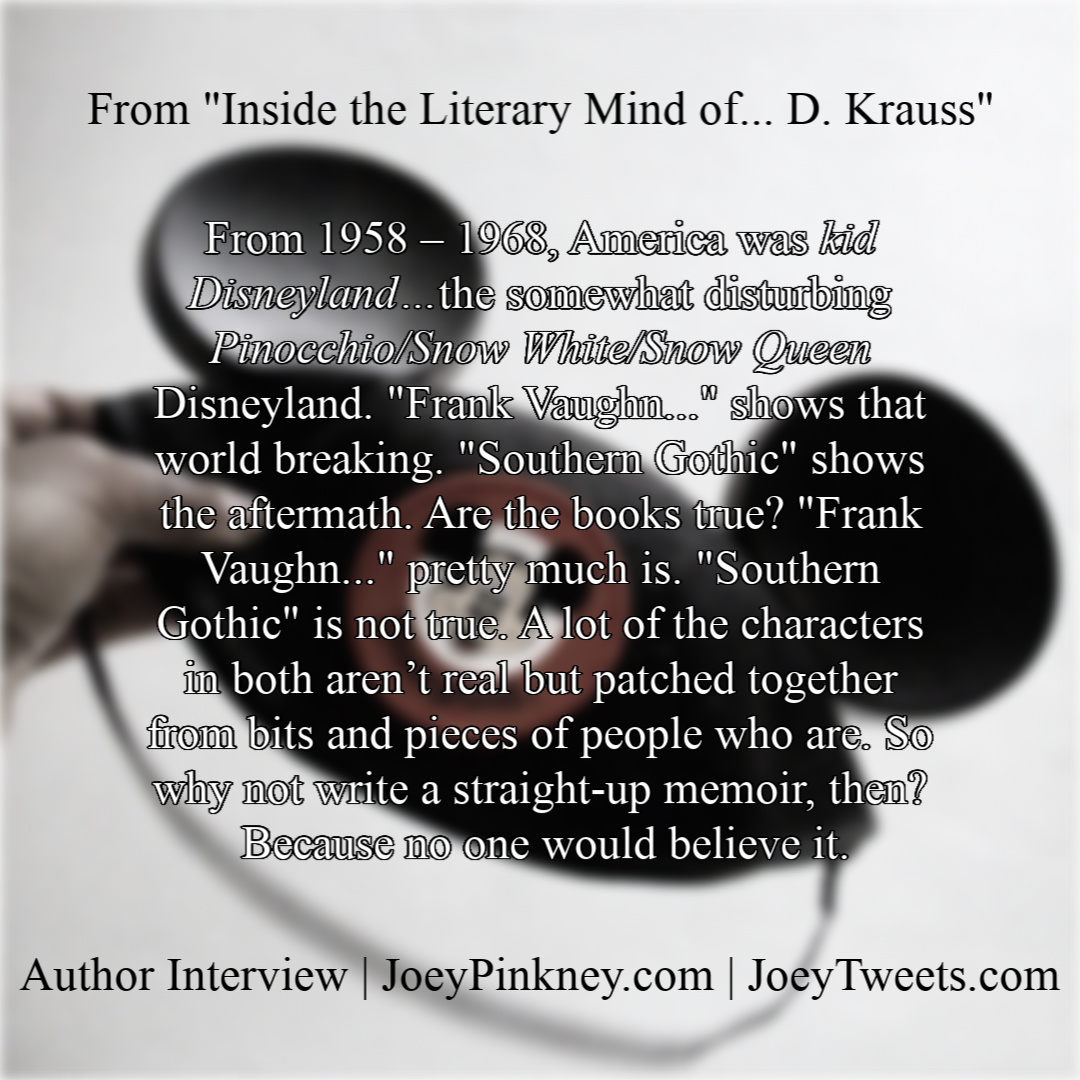 JP: The summer is the perfect season to have a growth-spurt experience-wise and emotionally. How did you come about choosing summer ’65 to be the catalyst of the adventures embedded in Frank Vaughn…?

DK: I mark the summer of 1965 as the end of America’s innocence. It’s when things started going very wrong, not just for me personally but across the country. It was like a great disturbance in the force, the slouching of some great beast – and an ugliness that we either did not know about or had ignored – reared a head.

If I had to pick a seminal event, it was the Selma march. Watching that on Walter Cronkite was downright terrifying. How could deputies and sheriffs and police officers, who were all supposed to be friendly and helpful, do stuff like that? A rift had opened in the middle of the country. On one side were our angry parents and on the other, we bewildered kids. We all eyed each other with ugly intent and things got broken. They still are.

DK: The boy was easy: I haven’t forgotten what life felt like back then. The man wasn’t, because he had to be a victim of those events and I’m not. I moved on. So Butch is the ever pitying not-quite-grownup who intellectually knows there’s no use wallowing but does so anyway. He is consciously and decisively a victim. I don’t have a lot of sympathy for him; indeed, I’m downright contemptuous. Butch’s brother, Art, is the much better man: he suffers from PTSD, too, but fights back, sometimes too much. Butch is a doormat, although he’ll deny it.

There was a point, about when I turned 20, when I had to decide if I was sum total of parts or self-made. I chose the latter. Butch chose the former. He regards himself as owed, that some father figure somewhere has to be the nurturer, the guide, the Balm of Gilead. That’s why he becomes a preacher, seeking to gain the Father’s approval. He doesn’t understand the true nature of God, despite all his training. I do.

(WARNING!! Shameless authorial plug!…If you want to know the nature of God, read the Ship trilogy: The Ship to Look for God, The Ship Looking for God, The Ship Finding God. God and I talk every day. The conversations are not always pleasant.) 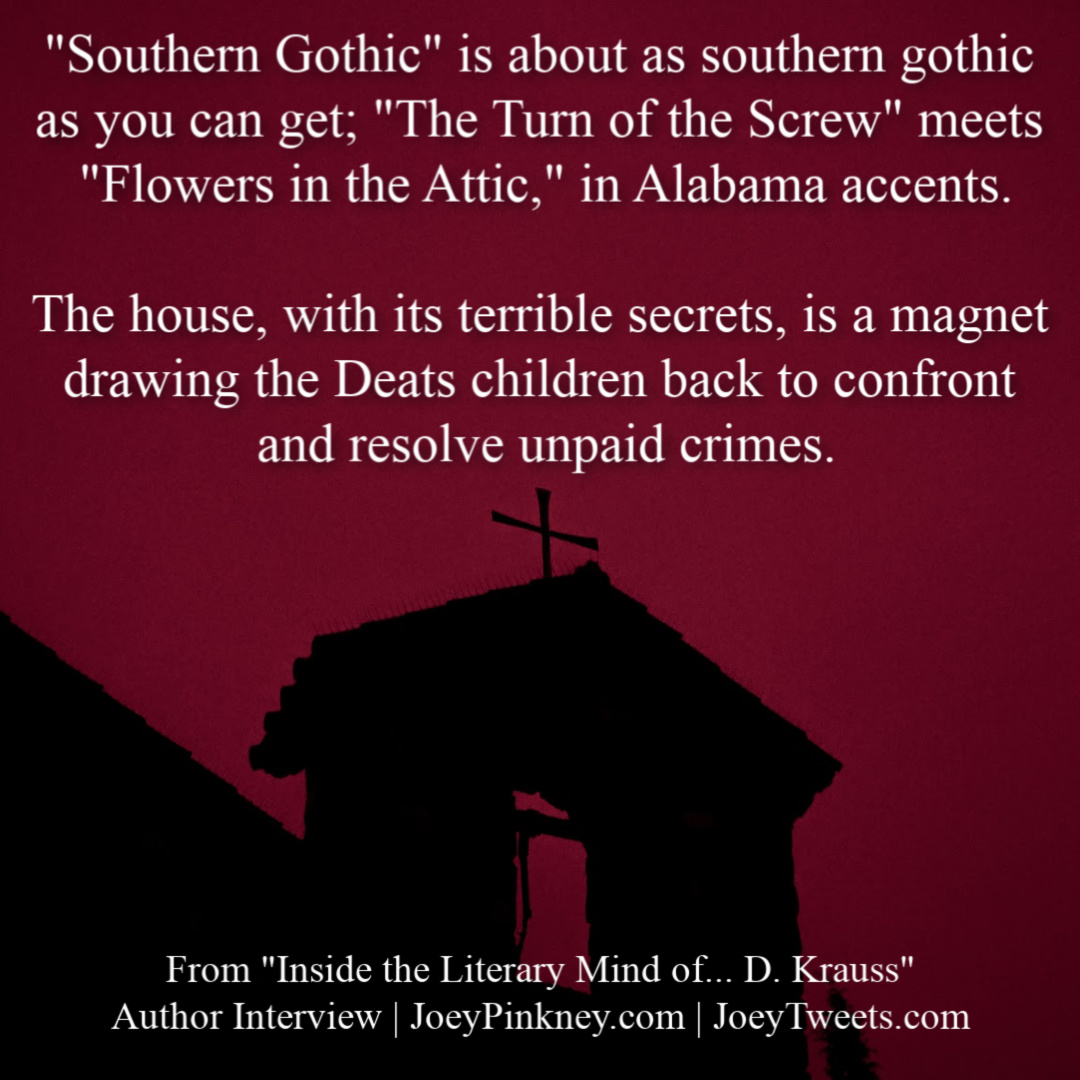 JP: For those who are not familiar, could you give us a working idea of what Southern Gothic is, in terms of a literary genre? Secondly, in what ways does your novel of the same name encapsulate some of the best literary features of Southern Gothic fiction?

DK: There is an underlying horror throughout the deep South, the bones of murdered slaves and staggering ignorance fester just under the soil, making it rich and productive and deadly. Nothing grows without its taint. It is a beautiful and happy and simple place and it is dangerous. The mold grows in the walls. You have to kill it. Repeatedly.

The main character of any gothic novel is a house. Usher, Otranto, Manderley, they are all the spark and cause of everything that happens, from premature burial to crazy wives locked in attics. The house is Pandora’s box and everyone wants to open it, even when they hear claws scratching inside.

A southern gothic novel has the required house, but it’s poisoned by expectations of family and the unpaid crimes of previous generations. Everyone expects judgment, at any moment. Pick up Faulkner, if you want the best examples. Yeah, yeah, I know, I’m supposed to mention Flannery O’Connor about now, but I see her more as a writer of southern characters than gothics. One doesn’t always require the other. Faulkner always has a gothic house of some kind or another. The coffin in As I Lay Dying is one.

Southern Gothic is about as southern gothic as you can get; The Turn of the Screw meets Flowers in the Attic, in Alabama accents. The house, with its terrible secrets, is a magnet drawing the Deats children back to confront and resolve unpaid crimes. Butch wants to make everything all better; Cindy wants sleeping dogs to sleep; and Art, well, he doesn’t know what’s going on and doesn’t want to know, so who does Butch think he is, stirring ghosts?

JP: I see you have a “mid-quel” brewing with the title “Looking for Don,” and the story of Butch trudges on. What did you learn about your writing style while creating Frank Vaughn… and Southern Gothic that has shaped or refined your approach to cultivating the plot of this upcoming third installment?

DK: Looking for Don has a completely different tone than the other two, primarily because it is more paean, a salute to south Jersey in the early 70s, which was the best place and time to be a teenager. Just listen to the first three Springsteen albums to get a taste. All the events happen in one day, Butch making one disastrous decision after another, inevitably leading to the disasters in Southern Gothic some twenty years later.

But it’s a lot more fun because things haven’t been decided yet and there are still possibilities, so I wrote it with an air of indecision hovering about Butch. He does stupid things. He does brilliant things. And a lot of it’s pretty funny.

While I was reading Alistair Reynold’s Revelation Space series, it struck me that the best thing an author can do is not explain. Just don’t. Take it for granted that readers are pretty savvy and let context and common sense serve as explanation. I mean, does Reynolds ever explain the Captain’s tech virus? No! We get enough, though, to draw our own conclusions. We may not be dead-on accurate but that doesn’t matter, we know. I hope I did the same thing in the Frank Vaughn trilogy. Things are up in the air, never quite certain. As is life. 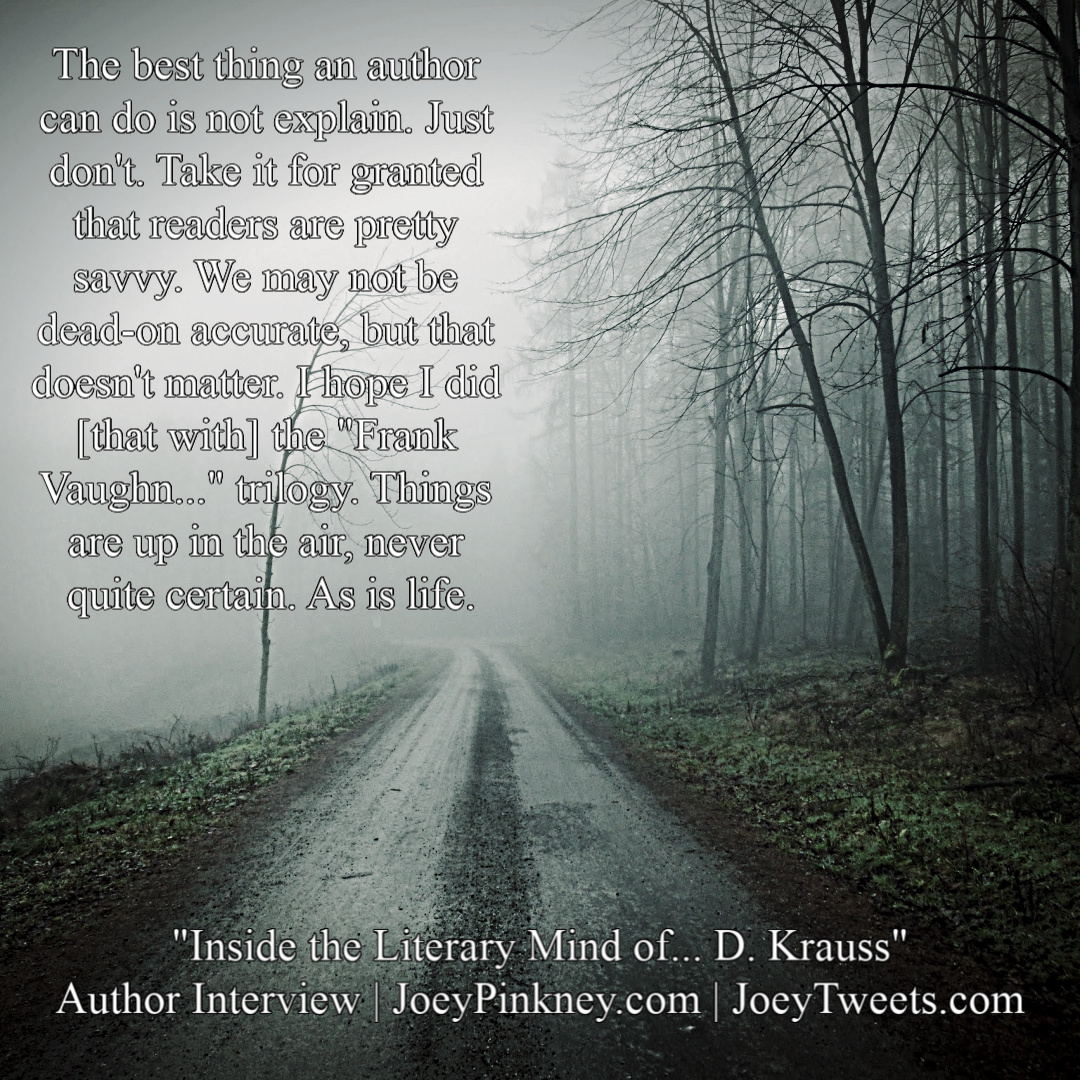