Joey Pinkney: How does practicing the haiku poetry form shape your thought processes and the way you move through your literary world?

Cendrine Marrouat: There are only two poetry forms that I write now: the Haiku and the Sixku, my invention. The Haiku has been part of my life for years. Not only has it forced me to be very concise, but it has also taught me to be a more impactful artist. I see haiku everywhere I go. 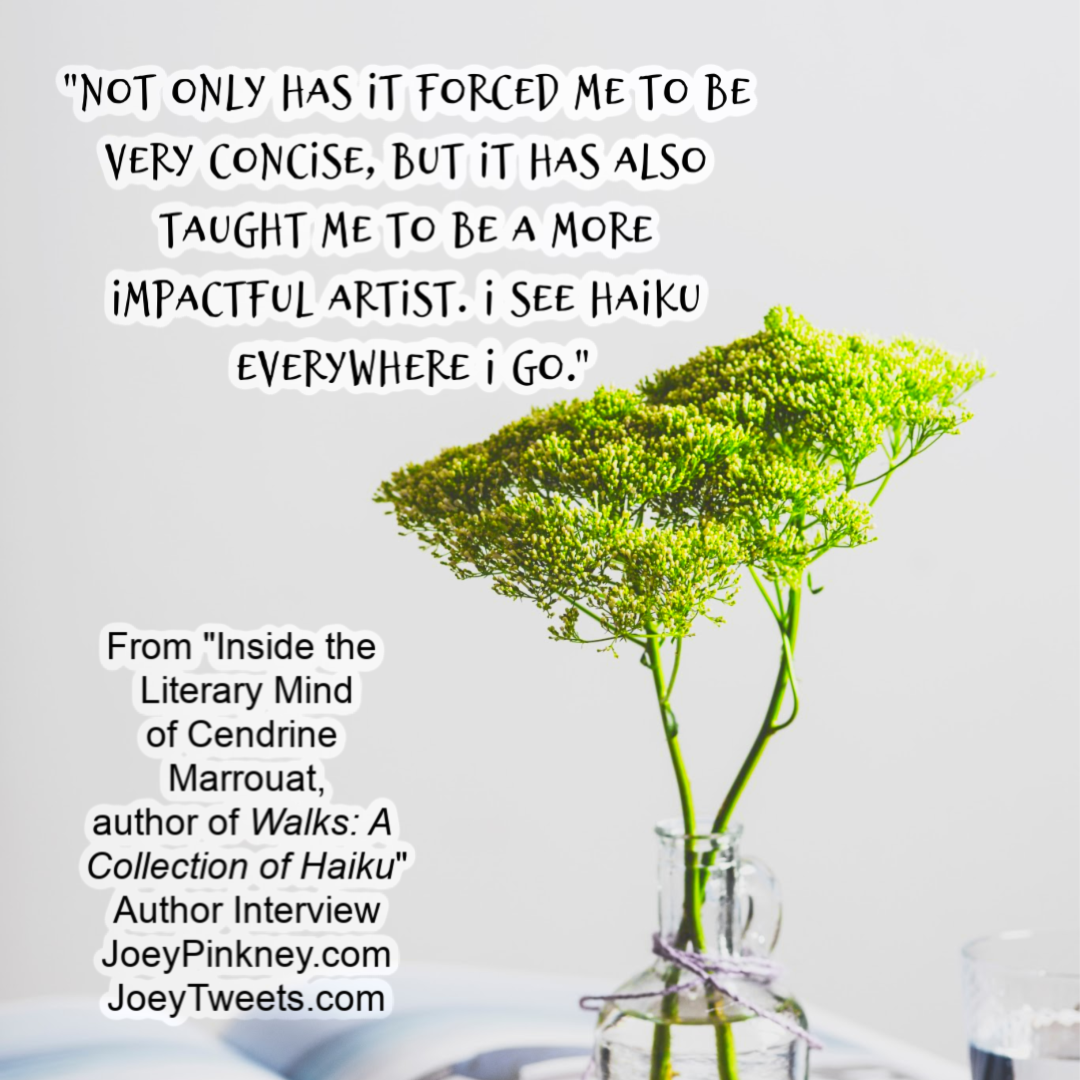 JP: What was your creative process for creating the content for this series, and even which pieces were picked to be published?

CM: Walks: A Collection of Haiku is an exploration of nature. Exploration requires movement. Movement is part of us. The idea came to me in a flash. I wanted to tie movement to self-discovery, which often happens in the most unexpected places and/or during the simplest moments. Each haiku I wrote became a piece of the puzzle.

JP: How has your haiku been inspired and refined by the other art forms you practice?

CN: As I mentioned, I only write haiku and sixku. A sixku is a six-word haiku (with a twist) based on a photograph. Other poetry forms do not make me as happy and as fulfilled as the haiku. That is why I do not practice them anymore. 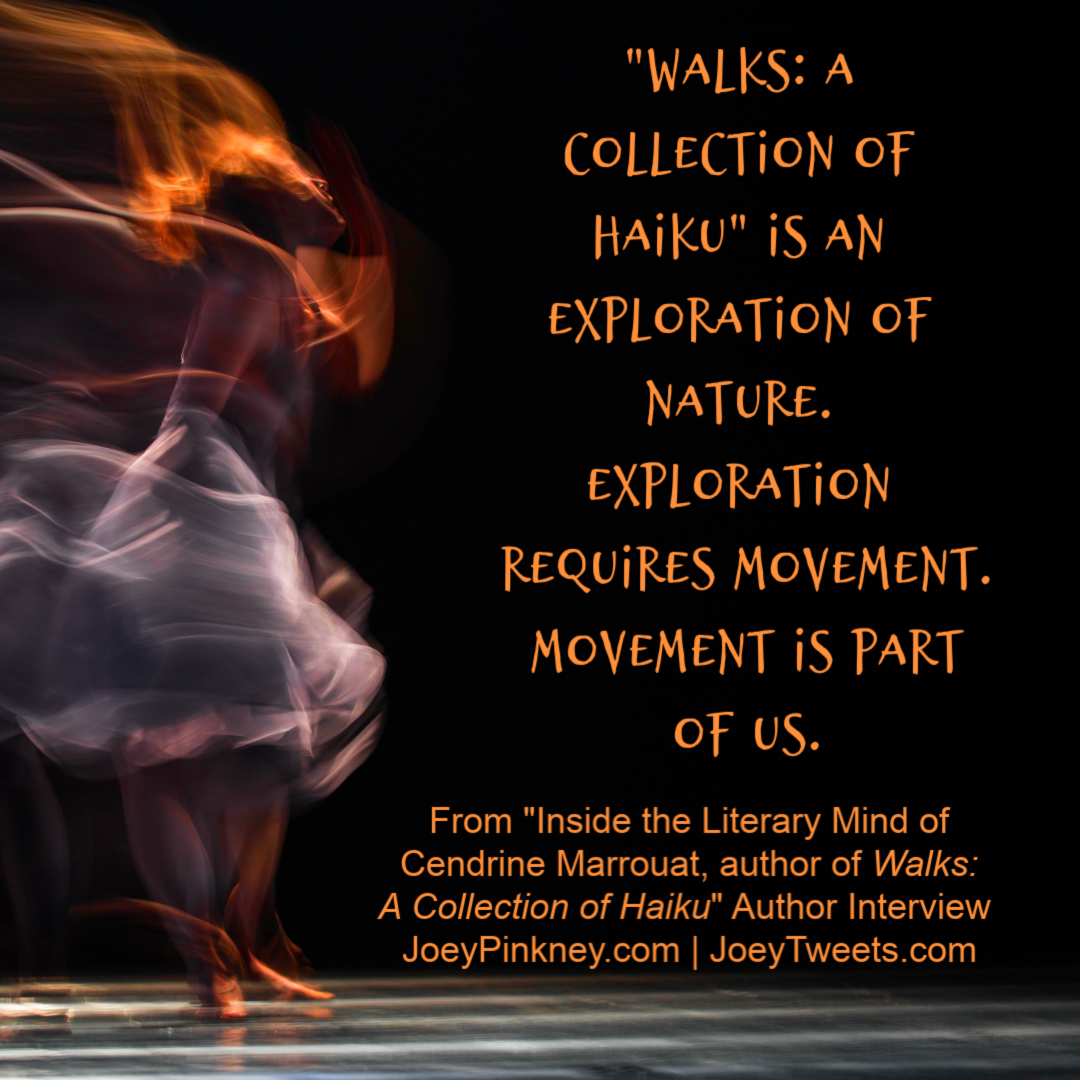 JP: What is your cultural background? How do you navigate the balance between your cultural heritage and this Japanese art form when it comes to the output that can be read in this series?

CN: I was born and raised in Toulouse, southern France, and have lived in Winnipeg, Canada, for more than 16 years. I am French and Canadian. As an artist, nature has always been my muse. I have always found inspiration in forests and parks. Traditional haiku freeze moments in time. They invite readers to see the world through different eyes.

I don’t think my cultural background has played any role in my passion for haiku. Like any other things I have published in my career, Walks: A Collection of Haiku is a way for me to celebrate life and share with others the beauty I see around me.

JP: There are readers see Haiku as being either too simple. There are also those who see this poetry form to be inaccessible. For either group, where do your suggest those readers start an earnest exploration into the world of Haiku?

CN: Whether someone finds haiku too simple or inaccessible, my answer is the same: Try writing them the traditional way.

Many poets write brilliant American haiku. However, I find that they often lack an element of surprise – a twist that you expect of the form. And their authors often mistakenly believe that they have to stick to 17 syllables, no matter what. Actually, the 5-7-5 syllable pattern is a “mistranslation” of Japanese. Japanese poets do not count in syllables but in “onji” (or “phonetic sounds”). William J. Higginson explains in The Haiku Handbook, a must-read to understand the form, that the 17 onji of traditional haiku work better as 12 syllables in English. Other books recommend using 8 to 12 words. Now that I focus on 12 syllables, haiku make a lot more sense. I feel less constrained and more creative. I write a new piece almost every day!

One thought on “Inside the Literary Mind of Cendrine Marrouat, author of Walks: A Collection of Haiku”