Joey Pinkney Exclusive Author Interview
Inside the Literary Mind of…
The Professor, author of The Occult Meaning of Masonry: Its Symbols and the Chakra System
(Pillar Book Publishing) 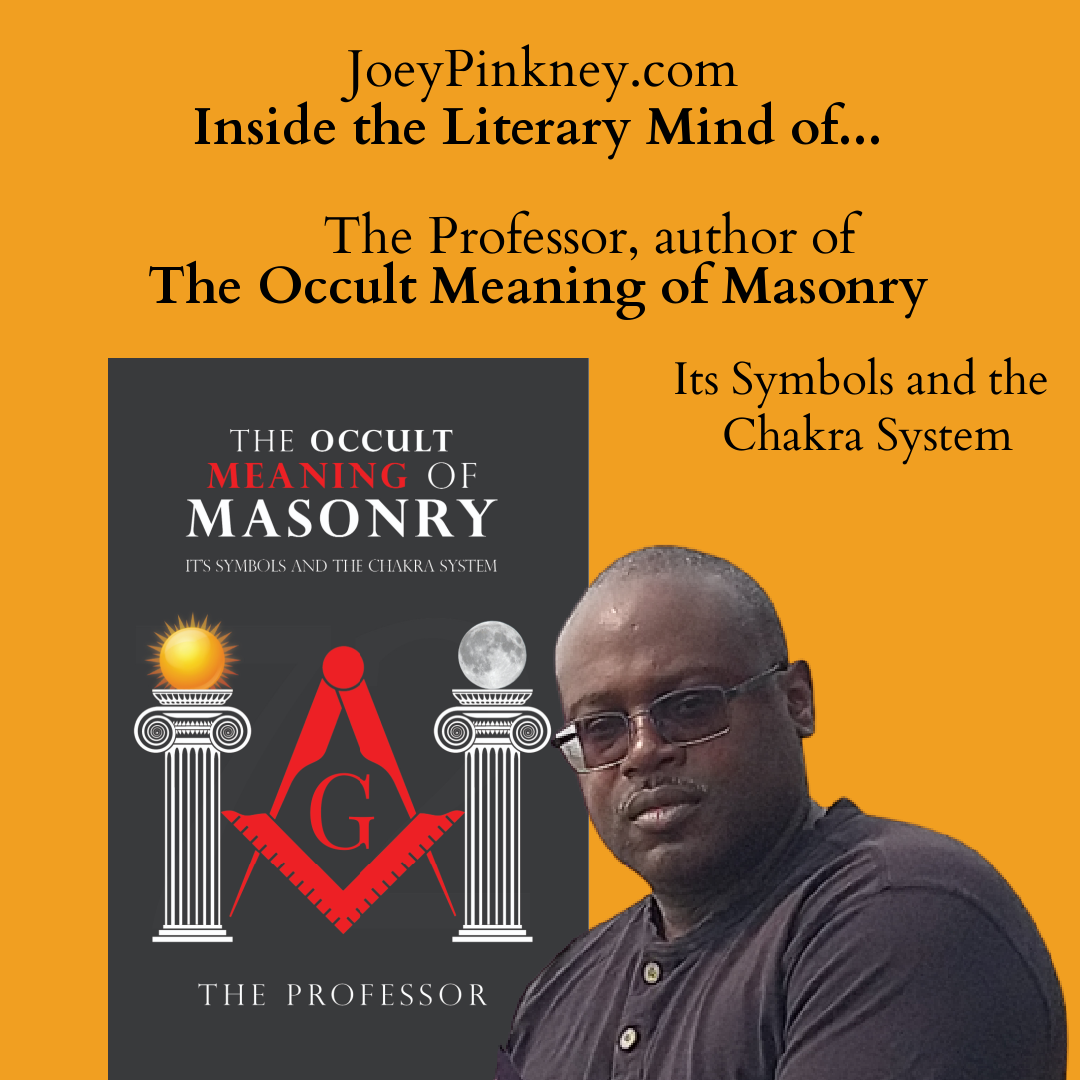 The Occult Meaning of Masonry: Its Symbols and the Chakra System was written by a Prince Hall Affiliated Free & Accepted Mason. It is an exciting and fascinating roller coaster ride with refreshing new concepts not generally seen in terms of Masonic scholarship. This book is the only one of its kind to demonstrate the unequivocal connection between the Hindu Chakra System and the 3 Degrees of Freemasonry.

Many of the things misunderstood about Freemasonry are because of the presumption of “secrecy” and that is this book brings to light. This book was intended to be a lamplight at the foot of the newly Initiated, Passed and Raised Master Mason desiring more than what is readily apparent.

Joey Pinkney: What is the core benefit of The Occult Meaning of Masonry in terms of finding and exploring the intersection between two, seemingly mutually-exclusive systems of ideology – the Chakra system and Freemasonry? Can people outside of either system utilize the information and concepts found in this volume?

The Professor: Excellent question, Joey, and the answer is actually what motivated me to even attempt such a book. The core benefit of this book lies in the application of what I set out to explain within its pages.

Quite possibly, this book is the only of its kind to show a clear connection between the Chakra System and Freemasonry. I demonstrate that connection unequivocally and give detailed instruction on how  the Chakra System and Consciousness can be applied to the reader’s life. I do not believe in broaching a topic without presenting tangible applications. I thought this was such an interesting subject to show the interconnectedness of all things.

JP: How can The Occult Meaning of Masonry help someone who wants to get a better understanding of what makes them a part of the totality of the human race as well as a unique being within that circle?

TP: Another outstanding question, and one I deal specifically with in the book, and briefly touched on in my first response. The question you ask is a matter of universality.

Like in the old saying that the ocean is contained within one drop. Freemasonry is known as a “beautiful system” of morality, veiled in allegory and illustrated by symbols. As such, I demonstrate over and over the correspondence between the Masonic System and all other systems, be they biological, psychological, astronomical, astrological, Metaphysical or Alchemical.

The thing that makes each of us unique is what we individually bring to the whole. In my humble opinion, there is only one God, known by many names. On the surface, these many names may appear dissimilar and unconnected, yet in the end they’re just the smaller pieces to a much larger picture that will only tell a coherent story once all the pieces have been joined together. 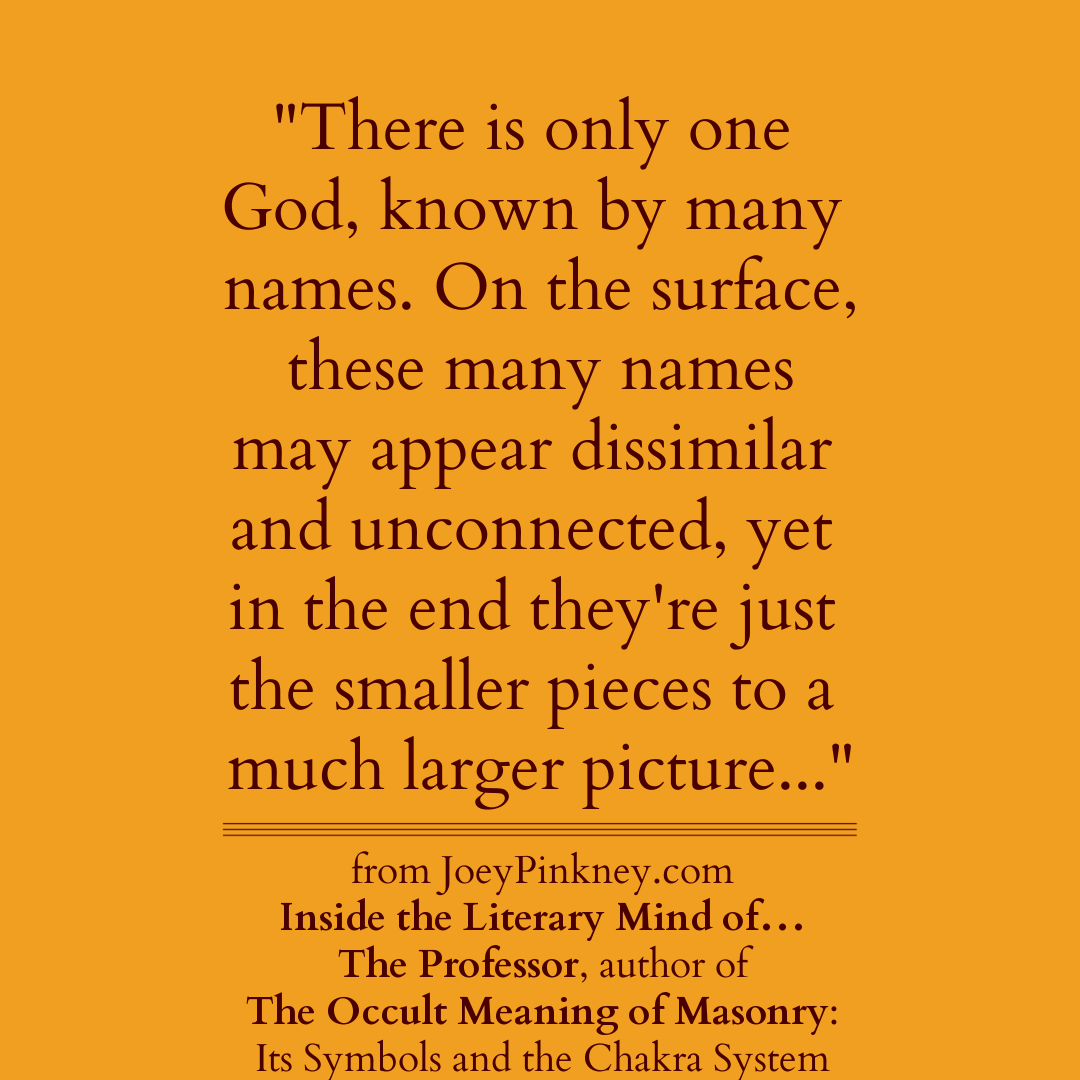 JP: As a self-taught symbologist, you’ve had to consume a lot of information and also ponder the connections and the contradictions between symbols and their true meaning. What symbols and/or revelations lead you to concentrate your studies on the connection between chakras and freemasonry?

TP: Freemasonry is shrouded in what appears to be mystery and secrecy. This applies even amongst those who claim membership. And it was this juxtaposition, this seemingly contradictory dichotomy that tugged at the edges of my conscious mind and motivated me to write this book.

I joined a Masonic Lodge and felt as if something was missing, as if something had been relayed, that hadn’t been given voice. I was aware of the Chakra system prior to my joining, and one day shortly thereafter, that connection jumped out at me in meditation. From that point, it took me five years of intense researching to compile the information only found within the pages of my book.

JP: Although it is said that the origins of many of the symbols and teaching are lost in ancient history, it is well known that pre-colonial Africa gave birth to many of the degrees that are the foundation of Freemasonry as well as the foundational knowledge of the Hindu Chakra System. How does this book link back to that disregarded aspect of both schools of thought?

TP: Joey, if I didn’t know any better, I’d assume that you read my book already, LOL! In all seriousness, I make it a point to elucidate this time and time again throughout my book. So much so that near the end I apologize for bringing up the subject yet again. The farther back in history you go, it is discovered that African genius permeated the width and breadth of our planet. We know this for two reasons.

At one time, all of the continental land masses were interconnected, known as Pangea. We’re taught in elementary school that continental drift separated the unified land mass. This dispersion theory actually explains the second reason why in every corner of this planet, on every land mass or island, there were indigenous people who all had the same ethnic characteristics of thick lips, broad nose, furled hair and hued skin.

The Hindu Gods are depicted as blue black. In Egypt, Osiris holds the moniker Lord of the Perfect Black. The land we know as Egypt is a Greek word meaning “burnt face.” The inhabitants of that land anciently referred to themselves as Kemites. In their tongue, Kemet meant: “The Black Land.” In Nordic mythology, the Frost Giants who existed prior to the Gods were similarly blue black as the Hindu Pantheon. In Japan, the saying existed that for a Samurai to be brave, he must have black blood.

These are not just a proliferation of worldwide coincidence. Joey, understand that I began writing my book five years ago. For it to have culminated at this time of social unrest and injustice, I view as too synchronicitous to chalk up as a matter of chance. 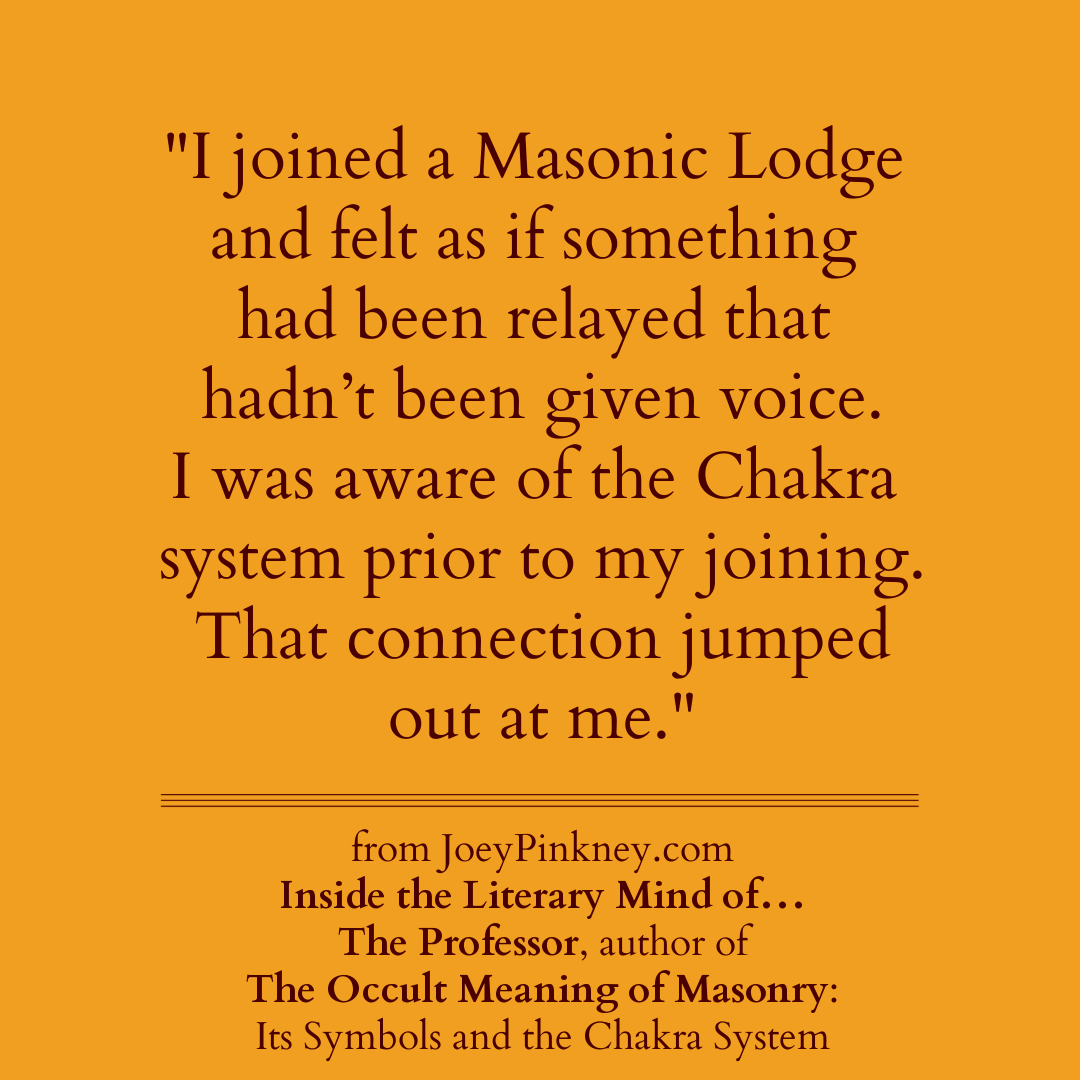 JP: With this book being, in itself, an Occult document, many people will assume this is evil, demonic, and cultish. How would you explain, and define, what makes this book good instead of bad to people who have preconceived (negative) notions of the subject matter this book discusses?

TP: I chose that word purposely and deal with the reasoning behind it in the very first chapter. It was once said that if you wanted to keep something from a Black person, put it in a book. Our great grandparents and grandparents took this to be an issue of literacy and pushed hard for our rights to an education.

However, that saying encapsulated more than just illiteracy. As a deeply spiritual people, we are prone to superstition. And once we deem a thing evil, that stigma is passed down from generation to generation.

Yet, most would be surprised to know that the word “occult,” only within recent memory, came to be synonymous with evil. In fact, not until the early 1900’s did the word begin to morph into the meaning it is given today. Originally, it simply meant something hidden or concealed in plain sight.

If we remove the emotional charge behind the word and look at it objectively, we can see two words conjoined. One being occ (as in occular) clearly in relation to sight. The second half being cult(ure). So the word can also be defined as hidden culture. However, given the negative connotation associated with the word Occult, priceless information can be hidden from us if only given a title that will send us running.

So in a sense, you can still hide something from us by putting it in a book. Thus, I purposely used this word to first grab the readers attention. It’s also as a litmus test. If the potential reader can be barred from entering the temple by a mere word, then so be it. 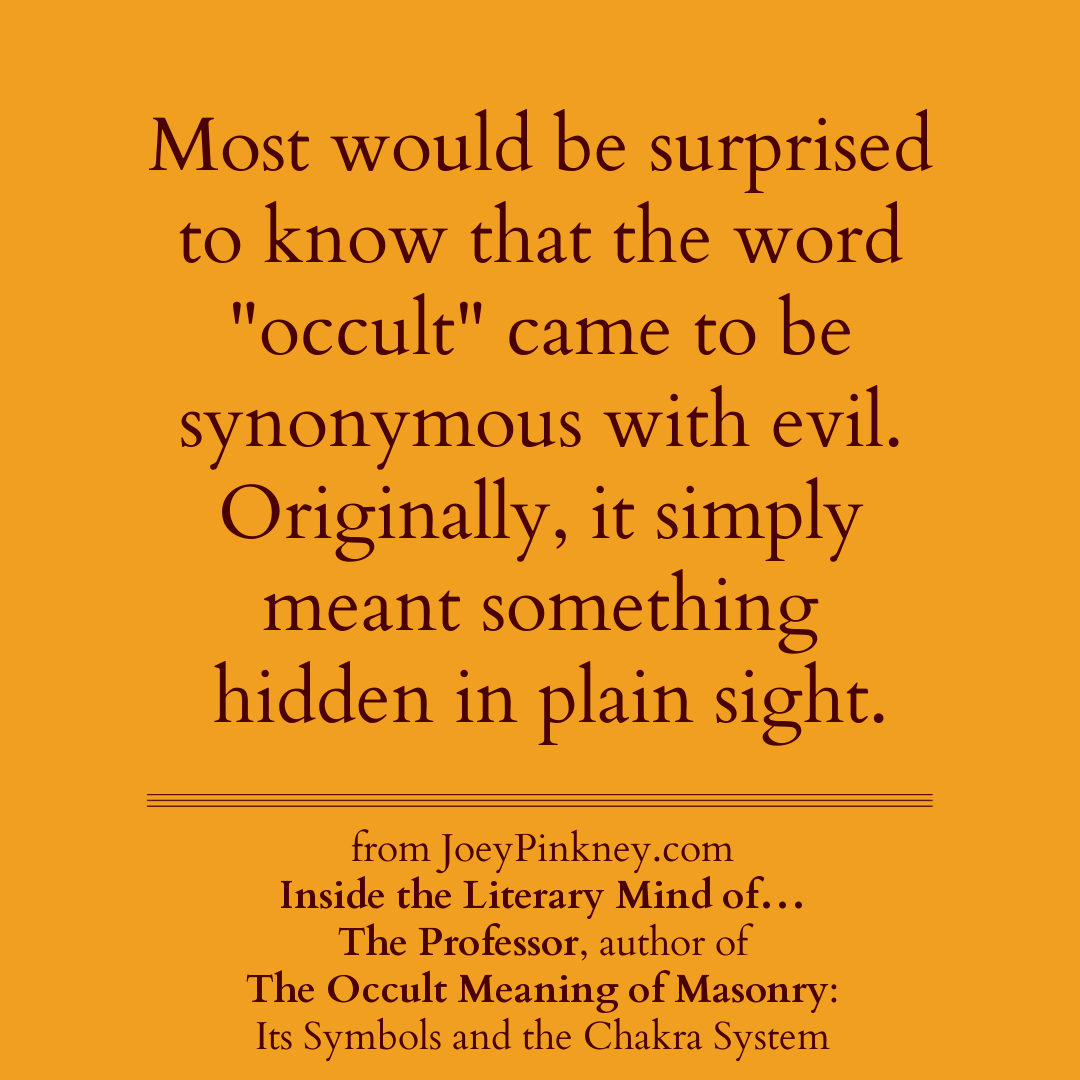 For more information about The Occult Meaning of Masonry: Its Symbols and the Chakra System and its author, please go to https://pillarbookpublishing.com/.