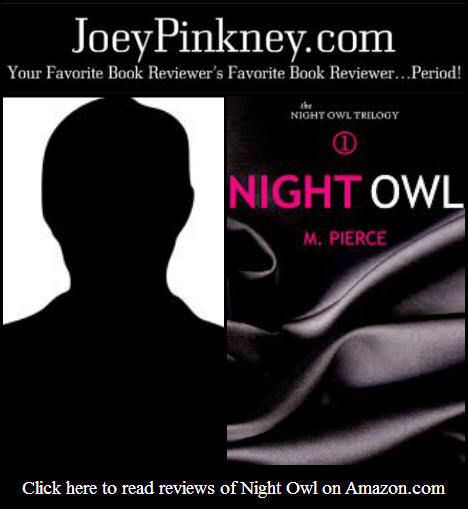 “Night Owl” tells the story of two strangers — Matthew Sky and Hannah Catalano — who meet online as writing partners. Their relationship is safe and anonymous. When Hannah slips up and sends Matt an email with her name and picture, everything changes.

Matt is drawn to Hannah inexorably and, despite Matt’s many secrets, the two soon begin a heated real life romance. When Matt’s secrets come to light, Matt and Hannah’s love is put to the test.

Joey Pinkney: Where did you get the inspiration to write “Night Owl”?

M. Pierce: I got the inspiration for “Night Owl” from a girl and from my life. That’s really all I can say. END_OF_DOCUMENT_TOKEN_TO_BE_REPLACED

JoeyPinkney.com Book Review
Not Quite What It Seems
By Mari Walker
(St. Martin’s Press)
3 of 5 Stars

Not Quite What It Seems, by Essence Best Selling Author Mari Walker, is a knotted tale of the life of Jadyn Collins that slowly unravels one chapter at a time. Jadyn Collins’ world pulls her in many directions. She struggles to resolve the emotional scars caused by childhood experiences. She is relentless in her pursuit to become a professional dancer. She has found love, yet her life goals do neatly align with her boyfriend’s future plans for both him and Jadyn. On top of all of that, she yearns to find and reunite with her biological father separated from her and her two younger brothers by her mother when she was in her early teens.

Jadyn is the daughter of Samai Collins, the main character of Mari Walker’s debut novel Never As Good As The First Time. A little older and on her own, Jadyn’s character is END_OF_DOCUMENT_TOKEN_TO_BE_REPLACED

An extremely fed up Celeste Styles sets her beloved salon, Dime Piece, on fire in an attempt to head South and start her life anew, away from her married boyfriend Rah-lo, a dealer. Meanwhile, Ishmael, Rah-lo’s business partner, best friend and confidante, tries to forget his feelings for Celeste with a relationship with Nina-and a rekindled affair with Robin. Tracy Brown keeps the drama flowing and the pages turning as the love triangle converges explosively in Atlanta.

Joey Pinkney: Where did you get the idea and inspiration to write Twisted?

Tracy Brown: I wrote part one (Dime Piece) in 2003. The ending left many readers eager for a sequel. Everyone wanted to know who burned down the shop and what happened to all the characters. I penned the sequel in order to answer those questions.

JP: What sets Twisted apart from other novels in its genre?

TB: I think each of my novels adds something special to the genre of urban lit. I try each time to do something unique that sets my work apart from other novels. Twisted was no different. The main character, Celeste Styles, is a mistress for most of the storyline. Despite that negative label, readers cheer for her and like her character. I think that’s different. Usually the mistress is described us some cold, cruel bitch. Celeste is a likable character who makes some questionable decisions.

JP: As an author, what is your writing process? How long did it take for you to start and finish Twisted?

TB: I write mostly late at night. Once the house is quiet and the kids have left me alone, I can focus on being creative. Twisted took me three months to write. I changed the ending several times before deciding on the one we published.

JP: You have a huge following. What have your readers expressed that they like about your books that keep them coming back for more?

TB: My stories aren’t typical or predictable. The characters come to life in the story. I try to be different from all the other authors out there. Although I am a fan of several urban writers, I want my stories to be unique.

In my first novel Black, there is a teen pregnancy. Unlike the typical urban drama, the young male takes responsibility for his child and a saga unfolds as these two young lovers try to defy the odds. In Dime Piece and the sequel Twisted, Celeste Styles is a mistress with a heart. Again, this is different from the average story.

Criminal Minded was a story of friendship, and there was a focus on the grandfather, Papa, and the wisdom he imparts. In White Lines, I tried to tell the true story of the drug game from several different perspectives. In the end the story is about love and redemption, so the usual elements of urban lit are there with an unexpected twist in each novel.

JP: What’s next for Tracy Brown?

TB: I’m working on a novel called Snapped. I’m very excited about it! I think that the readers who loved the saga White Lines will adore Snapped. It’ll be released in early 2009, so stay tuned.

P.S.S. If you want to be feature in a 5 Minutes, 5 Questions With… series, email me at joey.pinkney@gmail.com or http://myspace.com/joeyreviews