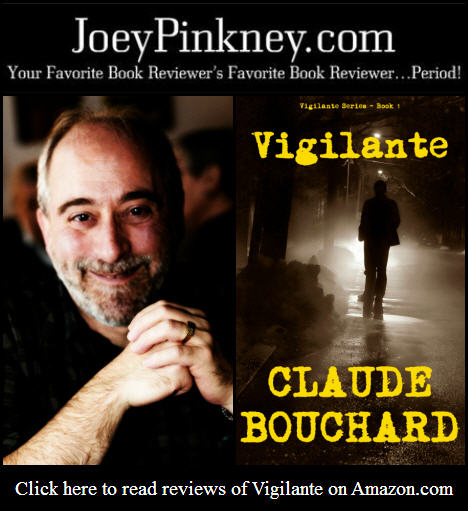 Montreal, summer of 1996 and in the dark of night, a vigilante prowls the city’s streets. The targets of his bloody rampage: Murderers. Gang bangers. Rapists.

Six months. Sixteen murders. The harried police are without a clue until they receive an email from the assassin himself. Lieutenant Dave McCall needs help to track the killer’s message and calls on Chris Barry who runs a security firm specializing in computer communications.

Together, they launch a grim quest to bring this remorseless killer to justice. But whose justice will prevail: theirs or the vigilante’s?

Joey Pinkney: Where did you get the inspiration to write “Vigilante”?

Claude Bouchard: Though “Vigilante” has nothing to do with O.J. Simpson, it is while watching his trial during the summer of 1995 that the idea for my book was born. As it became apparent that Simpson was literally getting away with murder, I got to thinking of writing a story about someone out there “administering” a crueler justice to those who slipped through the system’s loopholes.

JP: What sets “Vigilante” apart from other books in the same genre?

C.B.: It’s likely other crime thrillers exist out there similar to mine. However, what differentiates a writer’s work from that of others is writing style and voice.

My writing has been described as stark, pared down and raw. I don’t include filler for the sake of word count so descriptions generally include only enough information to situate the reader. My characters are real and so are the situations which arise in my novels. I do whatever research is required to ensure that what I write is accurate and plausible.

JP: As an author, what are the keys to your success that led to “Vigilante” getting out to the public?

C.B.: A good, well-written story and a professional looking book cover are essential from the start. Making the book available to the public has become easy via Kindle, Smashwords, Createspace, etc. However, getting people to know about it requires time and effort. I’ve used social media, particularly Twitter, to a great extent along with some advertising and promotional tools made available by retailers over time.

One thing about social media: I don’t recommend excessive use of “Buy my book” messages. The idea is more to develop a following of folks to chat and exchange with which eventually leads to interviews, blog posts and, yes, readers.

JP: As an author, what is your writing process? How long did it take you to start and finish “Vigilante”?

C.B.: I start with an idea and a title then get busy at the keyboard until my first draft is finished. Next comes editing, revising, polishing, correcting, rewriting, adding and deleting until the book is done.

My first draft of “Vigilante” was complete in about two months and was revisited several times over the years until I published in 2009. Time required to complete other books since has varied from a few months to just under a year.

JP: What’s next for Claude Bouchard?

C.B.: Although we only discussed “Vigilante” above, I should point out that it is the first of eight volumes in my Vigilante series, the most recent of which was released in mid-December 2013.

In addition, I’ve written a stand-alone, “Asylum”, as well as “Something’s Cooking”, a faux-erotica collection of short stories and recipes under the pseudonyms Réal E. Hotte and Dasha Sugah.

Up next will be further additions to my Vigilante series and another eventual stand-alone entitled “The Last Party”.

“Thanks for inviting me to do this, Joey! Much appreciated.” ~ Claude Bouchard

3 thoughts on “5 Minutes, 5 Questions With… Claude Bouchard, author of Vigilante”