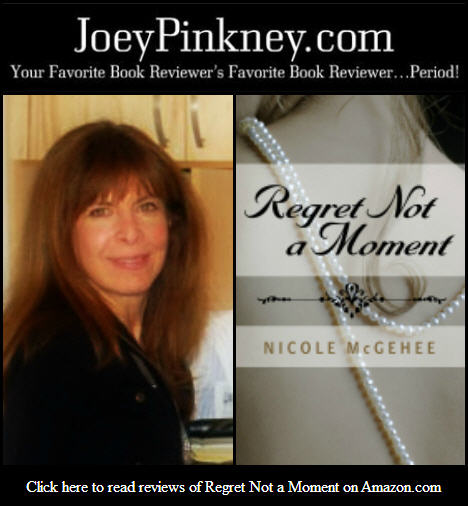 Nicole McGehee: I read an obituary of a woman who was a revolutionary in the male-dominated world of Thoroughbred racing. I thought the theme of a female ground-breaker would be compatible with the idea of a fictional African-American employee (soon-to-be good friend) becoming a ground-breaker in his own right.

“Regret Not a Moment” all came from my imagination. I did no research about the actual person because I didn’t want to write a biography. I set the tale in Virginia because I lived there, and it is famous horse country.

JP: What sets “Regret Not a Moment” apart from other books in the same genre?

NM: Unlike many self-produced e-books, “Regret Not a Moment” was purchased, edited and copy-edited by a major publisher: Little, Brown and Company, both in hard-cover and paper. In addition, it was bought by foreign publishers and translated into French, Spanish, and German.

JP: As an author, what are the keys to your success that led to “REGRET NOT A MOMENT” getting out to the public?

NM: A good query letter, which landed me offers from several agents. The agent I chose negotiated a very good deal for me.

JP: As an author, what is your writing process? How long did it take you to start and finish “REGRET NOT A MOMENT”?

NM: I start a book when an idea — and dialogue — are so stuck in my head that I have to free myself by writing it down. Once the beginning is down, the rest flows. I takes me 3-6 months to write my books. My editor at Little, Brown and Co. called for changes that took another month or so.

JP: What’s next for Nicole McGehee?

3 thoughts on “5 Minutes, 5 Questions With… Nicole McGehee, author of Regret Not a Moment”