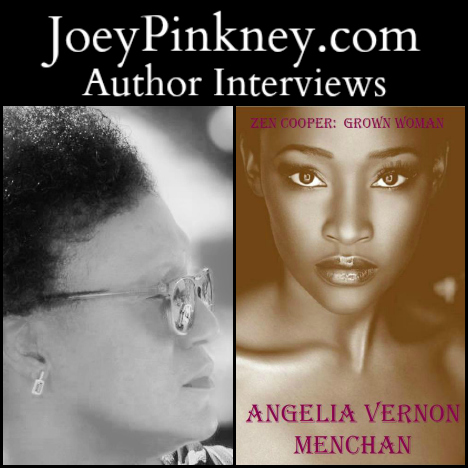 Angelia Vernon Menchan: Zen was inspired, in many ways, by the girl I was – growing up in a less than stellar neighborhood and being known as a brainy, odd girl with very strong opinions.

More than that, I was inspired by the savvy, beautiful young sisters I know, including but not limited to my niece Charlie. The “Zens” of the world are amazing in what they overcome, and I love writing about that.

JP: What sets “Zen Cooper: Grown Woman” apart from other books in the same genre?

AVM: Zen Cooper isn’t afraid to tackle issues such as mental illness and colorism, which are often unspoken issues in the African American community. We whisper about it without dealing with it. Not only that, Zen is not caught up in where she is from because she knows where she can go.

JP: As an author, what are the keys to your success that led to “Zen Cooper: Grown Woman” getting out to the public?

AVM: I am an avid marketer, and I treat my readers like family and friends. As such, they get the word out. I am also willing to place a free book in the hand of anyone who hasn’t read an Angelia Vernon Menchan book. If they love, it that translates to support.

I am confident that once some readers read my work they will read more and tell others about it. Every book is not for every reader. I focus on those who are interested.

JP: As an author, what is your writing process? How long did it take you to start and finish “Zen Cooper: Grown Woman”?

AVM: I write often. A forty-thousand word novel usually takes me about a month or two before the rewriting starts. I write fast, furiously and often. I waited until later in life to publish, so the stories are there waiting their turn!

“Thanks as always for talking to me. And to writers, I say WRITE ON!” ~ Angelia Vernon Menchan