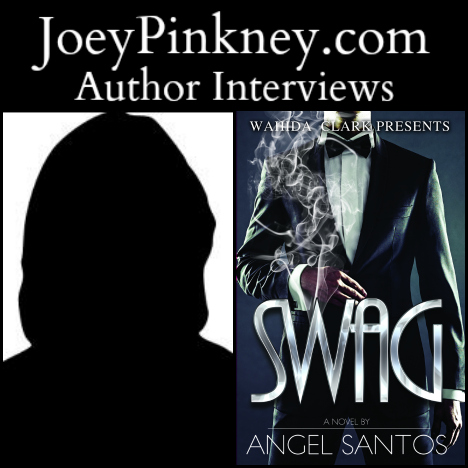 An intelligent woman dripping with sex appeal, devious ambition, and serious “swag” single-handedly intends to snag a top crime boss and infiltrate his entire organization after many failed attempts by the police department, DEA and FBI. But a new jack by the name “Swag” enters the scene with the exact same ambition.

Joey Pinkney: Where did you get the inspiration to write “Swag”?

Angel Santos: First off, I was inspired by Tasha Macklin, my best friend for life and her husband, Trae. Once I saw that Tasha wrote her book “Baller Dreams”, I got inspired. Second, my inspiration comes from living life – the things I see going on around me.

Sometimes, things are simply not what they appear to be, as in the case of my main character Jazmine Coleman. Although she is employed by the law, the tactics she uses to get what she wants are not always law-abiding.

Jazmine’s manipulates situations kind of like the inner workings of the American judicial system, where more laws are created to break or get around what is already lawful.

JP: What sets “Swag” apart from other books in the same genre?

AS: “Swag” is full of action and drama like most novels, but it requires more thought because of the psychological elements.

What sets my book apart from the others is the cleverness of my main character. She challenges those in power and puts their beliefs to the test, leaving them questioning if they still hold their original ideas in the same way as they once had.

Jazmine shows that intelligence, not physical strength can be used to attain better results when hunting any prey. She also shows that a female is just as capable as her male counterpart.

JP: As an author, what are the keys to your success that led to “Swag” getting out to the public?

AS: Being affiliated and published by Wahida Clark Presents, she goes hard for her authors. And I believe that having a storyline that stands out from the norm is critical to an author’s success.

Although goals for characters may be the same in books of the same genre, you have to make certain the way the character attains that goal is totally unexpected. Readers love not being able to guess what’s going to happen next in every scene.

Also, making sure your story has been properly edited before sending it to a publisher is equally as important. You have to believe in your work and make the publisher just as excited as you are.

You have to be sure to present the publisher with the very best writing possible. Establishing an online presence is equally important to connect with readers.

JP: As an author, what is your writing process? How long did it take you to start and finish “Swag”?

AS: Keep in mind that writing fiction is brand new for me. This is my FIRST book! But my writing process for “Swag” was a simple “what if” statement. Then I’ll ask “why”, which helps me to create the main goal for my character.

Sometimes I’ll think of the craziest ideas that go too far left, but then I’ll tone it down so the storyline will be credible to the reader. I began an outline, but “Swag” was already stuck in my head. I simply free-styled until I had a rough draft.

Finishing the rough draft took about four months total. I let it sit for a few weeks, and then I went back in and edited and revised as needed. Once that was done, I turned it over to Wahida.

JP: What’s next for Angel Santos?

AS: Right now, juggling my daughter, Jahara, husband Kaylin, our record label and getting some promo in for “Swag”. It’s all about getting tons of eyeballs and my book into the hands of as many readers as possible.

“If you don’t know who I am, read Thugs and the The Women Who Love Them, Every Thug Needs A Lady, Thug Matrimony, Thug Lovin’, Justify My Thug and Honor Thy Thug. All by Wahida Clark, the Official Queen of Street Literature.

I hope that you enjoy “Swag” and share your reading experience with a friend or loved one. And be sure to drop me a review of “Swag” on Amazon.com. Also, send out a tweet and thanks for all of your support. Let me know if I should do a “Swag 2″.” ~ Angel Santos