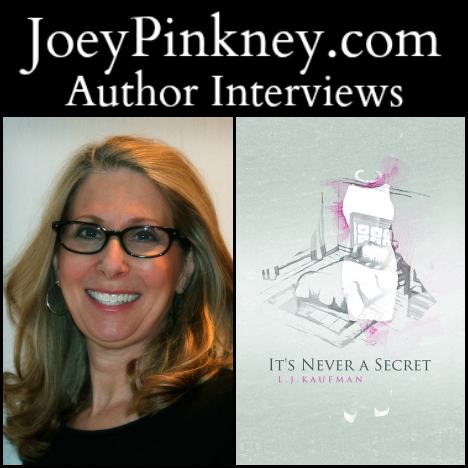 “It’s Never A Secret”, is a psychological thriller where the reader experiences the systematic brainwashing of Erica at the hands of her abusive husband, Neil. Golden handcuffs trap her in a cycle of abuse of cruelty and forgiveness. Erica blames herself for Neil’s escalating violence.

When keeping her secret of the abuse proves impossible, Erica’s true friends emerge encouraging her to break free. Her reluctance to flee her oppressive and dangerous marriage leads to catastrophic consequences. Revenge becomes her motivation for recovery.

Joey Pinkney: Where did you get the inspiration to write “It’s Never A Secret”?

L.J. Kaufman: “It’s Never A Secret” sprung from escalating reports of family violence. The acceptance of domestic abuse has become epidemic in our society. The blasé attitude and even glorification of abuse is disturbing.

Everyone person has experienced abuse, if not personally, then through a family member, neighbor, friend, or even co-worker. Gender, wealth or education are not anti-dotes to abuse. Domestic abuse is not hip; it is dangerous, suspenseful and terrifying.

“It’s Never A Secret is a fictional thriller to open the dialogue as to the awareness of the varying types of abuse. Why do people treat a boss with more respect than a loved one?

JP: What sets “It’s Never A Secret” apart from other books in the same genre?

LJK: “It’s Never A Secret” is suspenseful thriller written from the viewpoint of the abuse victim, Erica Reinhardt. The reader crawls into her mind and experiences the systematic psychological destabilization at the hands of her husband, Neil.

The familiarity of the abuse is eye-opening and allows the reader to understand why an educated, successful woman chooses to stay in the dangerous marriage for the sake of her child. “It’s Never A Secret” also shockingly demonstrates the far-reaching effects of abuse. Concealing the secret of abuse is an impossible and emotionally crushing task.

JP: As an author, what are the keys to your success that led to “It’s Never A Secret” getting out to the public?

LJK: I chose to self-publish “It’s Never A Secret”. Using social media is essential to create a buzz about the quality of the novel. I have created a comprehensive, yet growing, social media platform. The public needs to get a glimpse of me as an author to gain interest in the book.

JP: As an author, what is your writing process? How long did it take you to start and finish “It’s Never A Secret”?

LJK: My writing process is unstructured. I generally know where my story is headed. When I write I allow the creative process to overtake me. Many times the journey taken by the characters are surprising to me even as I write. “It’s Never A Secret” took many years to write and evolve.

LJK: “It’s Never A Secret” is written as a sequel. Revenge is a powerful motivator. Because the reader has such an emotional investment, a sequel will reinforce the power of loyalty, hope and personal power.

“Thank you for this opportunity.” ~ L.J. Kaufman