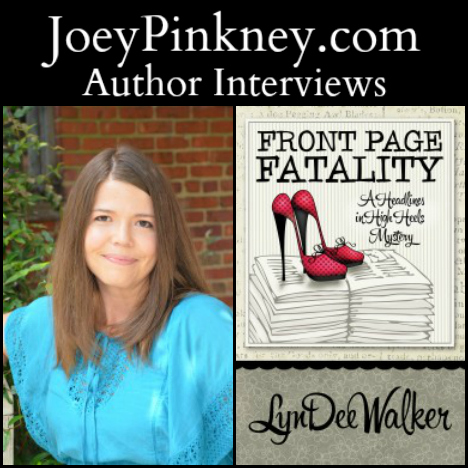 Crime reporter Nichelle Clarke’s days can flip from macabre to comical with a beep of her police scanner. Then an ordinary accident story turns extraordinary when evidence goes missing, a prosecutor vanishes, and a sexy Mafia boss shows up with the headline tip of a lifetime.

As Nichelle gets closer to the truth, her story gets more dangerous. Armed with a notebook, a hunch, and her favorite stilettos, Nichelle races to splash these shady dealings across the front page before this deadline becomes her last.

Joey Pinkney: Where did you get the inspiration to write “Front Page Fatality”?

LynDee Walker: I think it came from missing things: writing and the newsroom, specifically. I was a reporter who lived and breathed news, until I became a mom. About five years after I left journalism, Nichelle popped into my head and wouldn’t leave me alone until I started writing her story.

I love it. I have the best of both worlds—I’m home with my little ones, and I get to write about the news business. Plus, it’s a really amazing feeling when someone connects with my characters and loves my book.

JP: What sets “Front Page Fatality” apart from other books in the same genre?

LW: Nichelle is very independent and can take care of herself. Aside from that, many people have said that my journalism background lends the books an authentic air that makes them stand out.

JP: As an author, what are the keys to your success that led to “Front Page Fatality” getting out to the public?

LW: Persistence, a thick skin, and the ability to consider honest criticism. Without those three things, I promise, I wouldn’t be here.

I came from an industry where something I wrote was published nearly every day. So imagine my surprise when I figured out fiction publishing was an extremely demanding, competitive world. Good writing isn’t enough.

I spent years after I finished writing “Front Page Fatality” learning about the business, learning about craft, and revising my manuscript. Eventually, it got where it needed to be. But it took a lot of work.

JP: As an author, what is your writing process? How long did it take you to start and finish “Front Page Fatality”?

LW: Well, it’s very different now than it was when I wrote the rough draft of “Front Page Fatality”. Back then, I wasn’t sure where the story was coming from, or when it might go away. So I holed up with my laptop for every spare second and dashed off the rough draft in five weeks.

Now, with my second Headlines in High Heels novel about to launch (on October 15!) and the third one finished, I’ve learned that I won’t lose the story if I pace myself. So a rough draft takes me three or four months.

JP: What’s next for LynDee Walker?

LW: It has been a crazy, wonderful year. As I said, the second Nichelle novel, “Buried Leads”, will be on sale everywhere October 15. I’m gearing up for (and very excited about) the launch.

Quick on the heels of that, I have a Nichelle novella in the anthology “Heartache Motel”, which will be on sale everywhere December 10. And then the third novel in the series is newly finished. It’ll be available in April 2014.

Oh! And sometime in the next few months, the audiobook editions of “Front Page Fatality” and “Buried Leads” will be available from audible. I’m very excited about that, too!

“Thanks so much for having me!” ~ LynDee Walker